Obliquity chair, sculpted from ash, ‘an innovative piece of furniture’ 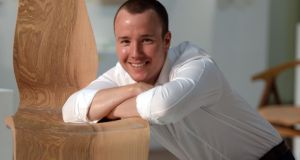 A barrister turned furniture maker from Athboy, Co Meath, has won this year’s RDS Award of Excellence, worth €7,000, and the California Gold Medal.

The announcement was made at the launch of the RDS National Craft Awards exhibition yesterday.

Enda Scott (30) won the top prize for his Obliquity chair, sculpted from Irish ash, on a perspex base.

Obliquity, in spatial terms, means deviation from the vertical or horizontal and the chair, with its undulating wooden form and transparent support, appears from certain angles to float in mid air.

“It is . . . an innovative piece of furniture demonstrating imagination in both form and function,” said Neil Read, the chairman of the judging panel.

Scott, who is the son of joiner Tom Scott, worked with his father after graduating in law and made his first piece of furniture – a rocking chair – for his girlfriend in 2007 triggering a desire to learn more.

Having trained with furniture designer David Savage in the UK, he set up his workshop this year. “I wanted to set standards. It is about the pursuit of perfection and excellence.

“My main focus is now to find a gallery . . . and find commission work,” he said.

Other winners include textile artist Eleanor Irwin from Co Armagh for her Cabinet of Natural Curiosities, a collection of insects, shells, rocks and plants in crochet, embroidery, smocking, lace and wire.

The New Entrants Prize went to John McKeag, a ceramic artist from Co Antrim and embroiderer Aisling Smith from the University of Ulster. Mary Palmer from Co Cork took the William Smith O’Brien Perpetual Challenge Cup in the patchwork and quilting category.

The exhibition runs until Friday and from August 6th-10th. It will be at the Hunt Museum in Limerick from September 4th-October 10th.