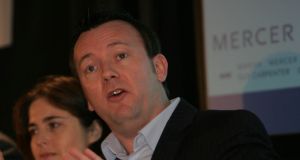 The Department of Energy has said contingency plans are in place in the event of a strike by ESB workers next month and has expressed confidence disruption to the public will be minimised.

Strike notice was served on senior management in the ESB at 2pm today and industrial action is due to commence at 8am on December 16th unless a breakthrough can be reached in talks between the company and unions.

ESB management and unions are in talks to discuss issues regarding the company’s pension scheme. The dispute centres on claims by union members that the company’s changes to its pension plan means workers are carrying a risk of €1.7 billion.

Talks between union officials and high-level executives in the ESB on Thursday night ended without agreement and with both sides acknowledging that a wide gulf persists between the two parties.

A spokesman for the Department of Energy however said Eirgrid – the independent body with statutory responsibility for managing the electricity transmission system in Ireland – is prepared for the impact of any potential industrial action taken by workers at the ESB.

“The company has detailed operational and communications plans in place to deal with a variety of scenarios with a view to minimising disruptions and mitigating the impact of any disruption,” said the spokesman.

A spokesman for Eirgrid said the company has “detailed plans” in place for a range of situations.

“Our role includes operating the high voltage national grid and balancing supply and demand for power 24 hours a day – keeping the power system stable. On an ongoing basis, we have detailed plans for a range of potential situations.

“We will of course ensure our plans for any situation are updated constantly, and will communicate with customers well in advance if there is a change,” he added.

Meanwhile, Minister for Social Protection Joan Burton said pensioners were worried they may be left without heat and light during the Christmas period as a result of a strike at the ESB.

Speaking at the Labour Party National Conference in Killarney tonight, Ms Burton urged workers and management at the ESB to make use of the State’s industrial relations machinery in order to avoid a “totally unwanted” strike.

“A lot of people who have retired, people like pensioners, they have expressed a lot of concern and worry to me about having their lighting and heating cut off either in the run up to Christmas or afterwards, in the coldest part of the year,” she said.

Ms Burton said the pensions regulator has accepted the ESB’s pension funding proposal for the period to 2018.

“In fact, given that many pension funds have suffered losses during the financial crisis, my general understanding is that the ESB pension fund is actually one of the best funded pension funds in the state,” she said.

Speaking after the talks with ESB management on Thursday night, the ESB group of unions general secretary Brendan Ogle said the two sides were “very far apart” but that talks would continue.

He added however these would not be conducted in the public domain. Last night, Mr Ogle had switched his mobile phone off and left a message on his voicemail which said that due to the “sensitive” nature of the talks, there will be no further comment from him in relation to the matter.

“The group of unions are involved in sensitive dialogue with the ESB to protect our members’ statutory and contractual pension rights,” he said.