Plus: Beware the extended warranty 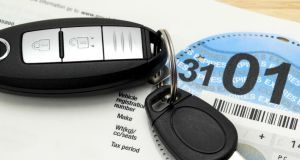 A reader, Clare, contacted us to complain about motor tax. She does not have a problem paying the tax, but she does have a problem being penalised for not being able to afford to pay it in one lump sum.

“I have to pay just under €600 a year, and, like many people, I suspect, I can’t afford to pay it in one go so I pay it every quarter and get four tax discs each year instead of one. Because of that, I have to pay nearly €80 more than if I paid just once a year. How can that be fair?”

It isn’t fair. And it is something we have highlighted on this page in the past. At present, significantly higher charges are imposed on drivers who pay their tax in instalments. Motor tax can be paid on an annual, twice-yearly or quarterly basis. People who pay in two instalments are charged 111 per cent of the annual payment, while those paying quarterly are charged 113 per cent.

The average annual motor tax in the Republic is about €500, which means those who pay the bill in instalments pay as much as €65 more than those who pay up front.

The Department of the Environment has defended its charging policy and claims the differential takes into account the extra workload for staff in motor tax offices, although a spokesman also confirmed that almost 70 per cent of applications were now processed online.

The bottom line is the bottom line. The extra charge generates more than €70 million for the exchequer each year, and while the excess bears little relationship to the actual administrative costs incurred, it is tax revenue and, were the rules to be changed, the people in the Department say the “loss of income that would arise from changing these arrangements would have to be borne elsewhere”.

Mark from Dublin recently bought a washing machine and was offered an extended warranty. “I agreed to take one out and now I am wondering if I was wasting my money and if there is anything I can do about it?”

Extended warranties are supposed to insure you against the cost of repairs for a period after a guarantee runs out, but they represent bad value for money. The reality is that extended warranties are sold to maximise shop profits, and frequently the sales patter is very pushy because the people doing the selling are on commission and acting out of self-interest rather than in the interest of the consumers they are serving.

People can be most vulnerable to such sales tactics just after they have made a major purchase. But the premiums for most extended warranties mean that, although you might be getting peace of mind, you are paying a horrendous price for it.

British Consumers’ Association magazine Which? carried out research on extended warranties several years ago. The research might be dated, but the facts are as relevant today as they were then.

The magazine looked at a washing machine (the appliance most likely to break down). It put the cost of repair at about €50 and the cost of a warranty at €175. Because modern washing machines don’t break down that often, you only have a 4 per cent chance of getting your money back, according to Which?

Not only that, but if a product is going to break down, it is most likely to break down in the first year after purchase, in which case you will be fully covered.

And even if a product of significant value breaks down after a year, you should still be able to get redress from the retailer under the Sale of Goods Act.

A lengthy wait for car insurance

Siobhán from Galway got in touch in a right state last week. On July 14th she paid €150 to the AA as a partial payment for her car insurance, which was due to expire five days later.

“Despite countless phone calls , I still have not received my insurance disc. As a result I’ve been unable to drive as it’s an offence not to display said disc,” she writes. A supervisor was due to ring her on three separate days last week but no call ever came. “I’m so frustrated by the customer service. The average call waiting is 13 minutes.”

We contacted the company and the issue has now been resolved and apologies sent.