British food minister expresses frustration that culprits have not been caught 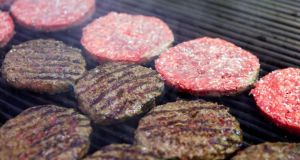 The ABP Food Group, which was at the centre of the horse meat scandal, has announced plans to DNA-test almost a million cattle a year. The firm says this will allow meat products to be traced back to the animal of origin.

Chief executive Paul Finnerty said the company had learned “significant lessons” from the horse meat scandal and had been closely examining the potential for DNA testing since then.

ABP’s former Silvercrest plant in Ballybay, Co Monaghan, produced the burger containing 29 per cent horse meat that was the focus of the horse meat scandal in January. It sold the plant to Kepak last month and the new owners announced last week that they had won back the Burger King contract whichthat was lost when the horse meat scandal erupted.

Traceability
Mr Finnerty told the UK-Ireland Food Business Summit in Dublin that ABP was planning to to DNA-test every animal processed in its plants.

“We’re taking the bold step by announcing today that ABPwill be the first beef processor, certainly in Europe, and possibly in the world, to DNA-swab every animal that we process. That’s close to one million cattle per annum,” he said.

“We will, in the future, be able to take any such product from any shelf or any restaurant table and trace it back through a 100 per cent DNA programme to the animal of origin,” As well as reassuring customers, he said the technology offered major opportunities for innovation. “Imagine being able to take ten steaks off a shelf and through DNA traceback be able to immediately identify which farms, which breeds, which age, which sex, which feed regime produced the best quality product,” he said.

“We’ve all learned significant lessons from the horse meat scandal, particularly us in ABP,” he said. “Consumer trust in the food industry, Europe wide, was breached. And our business, with a reputation for operational excellence, was damaged, not I emphasise in core fresh beef, but in frozen burgers and frozen meat products.”

UK secretary of state for environment, food and rural affairs Owen Paterson praised the Irish authorities for their work in handling the issue and said he had a veryconstructive meeting with the Food Safety Authority of Ireland on Tuesday.

He said it was “very important that whoever committed this fraud on the public is brought to trial and convicted...what is frustrating for us all is we have not yet found out the individuals. Somebody made a lot of money out of this”.

Minister for Agriculture Simon Coveney said the Irish authorities could only produce a report on the basis of what they found in Ireland “but ultimately Europol need to put the pieces together as to how this happened across the European Union”.