Phil Hogan promises changes in legislation before end of the year 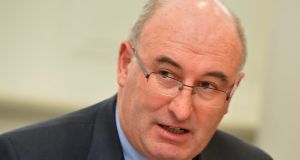 Phil Hogan: said suppliers are still not getting a fair price from supermarkets for their produce

New legislation to eliminate unfair treatment of suppliers by supermarkets has been promised by EU agriculture commissioner Phil Hogan by the end of the year.

Mr Hogan said it was clear a voluntary code was not working, and suppliers were still not getting a fair price from supermarkets for their produce.

“We are looking at new models and new frameworks in legislative terms that will actually concentrate the minds of all the actors in the food chain, so that the producer should not be squeezed any more.”

Asked for a timeframe, he said the changes would be brought in “before the end of the year”.

“There has been a considerable reduction in the proportion of the margin and profitability going to the producer. There is a squeeze by the retailers in particular in relation to the amount finding its way to the producer.”

He said the EU could learn from countries such as Spain and the UK, and he cited one proposal to fine retailers up to 1 per cent of turnover for unfair practices.

“We are also doing some work on the economic data to give more robustness to the data to defend the position that we see at the moment where there’s a massive reduction in the amount of money going to the producer.”

Ms McGuinness said Mr Hogan’s comments had moved the issue “a mile further down the road” than where it was with the previous commission.

“We don’t have a fair transmission mechanism of consumer price back to producer. There are a number of practices that are meant to be stopped by a new voluntary code of conduct.”

Ms McGuinness referred to allegations of bullying of suppliers and fear over speaking out about such practices.

She said we should certainly hear from farmers and suppliers “of any activities in the food chain that just aren’t good practice”.