Changes to south Dublin routes could leave Killiney without bus 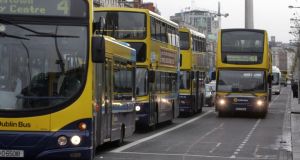 Cuts to routes around the Dún Laoghaire-Rathdown area have been proposed by councillors. Photograph: The Irish Times

Killiney could be left without any bus service if plans by Dublin Bus to scrap the 59 route go ahead.

The proposed cuts include to the number 7, 8, and 59 bus routes and will affect areas such as Dún Laoghaire, Sallynoggin and Loughlinstown.

People before Profit councillor Melissa Halpin said the number 7 route, from the city centre to Loughlinstown, would bypass Sallynoggin to go down the Sally Glen road.

A change to the number 59 route would leave Killiney village without any bus route as the cut proposes rerouting the bus away from the village.

Ms Halpin said if the 7 bus route was changed, Sallynoggin would be left without a direct link into town and to St Vincent’s hospital.