Bamboozled by your utility bills? You are not alone 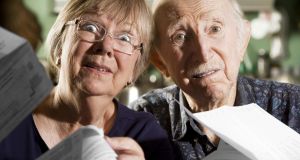 “A large percentage of people say their bills are difficult to check for accuracy, which puts them in a vulnerable position.” Photograph: iStock

Most Irish consumers like to think of themselves as being well able to spot a bargain. But the truth is, most of us are useless at working out whether or not something is good or bad value unless the choices we are given are very simple.

This is no idle comment; it is backed up by convincing evidence put forward by the newly minted Price Lab at the Economic and Social Research Institute.

Over the past two years, a team of psychologists and economists have used behavioural economics to work out when products become too complex for consumers to make smart decisions.

The ground-breaking research, led by economist and former BBC journalist Peter Lunn, found that when just a couple of factors were added to a product’s price, virtually everyone – even those who were numerically literate – grew confused and made bad choices.

The study showed that even familiarity did not make any real difference when deciding on the value of a product. The 500 or so subjects who took part in the trial were just as terrible at identifying a bargain when looking at something they knew well – such as a house in Dublin city – as something they had never seen before (a Mayan temple, say).

Virtually everything hinged on how many different factors were used to describe a product. Lunn was surprised just how bad consumers were at making informed decisions – he even admitted to not being great himself. He says the study has far-reaching implications for switching and competition.

Lunn points out that, if people are unable to make accurate decisions about which company offers the best value for money when presented with a few key facts, the benefits of competition could easily be lost. The findings have caused him to modify his own behaviour, particularly when it comes to the use of price comparison websites and apps.

His logic here is: it might be easy to befuddle a person, but it is much harder to confuse a computer programme.

In suppliers we trust

Sometimes the only thing you have to do to confuse consumers is present them with a bill. A rather alarming piece of research was published last week from one of the price comparison websites Lunn might find himself relying on in the future.

The survey, by Switcher.ie, suggests that Irish consumers are being “bamboozled by overcomplicated bills”. Their complicated nature means many people are losing money and making the mistake of always trusting their suppliers to get their bills right.

It shows that half of those who took part in its online survey admitted to having difficulty checking their electricity or broadband bills for accuracy, and 56 per cent said they found it hard to check their gas bills. One in four said they struggled to find important information on bills, 29 per cent said their bills were too complicated, and 30 per cent said bills contained too much jargon.

That might well be a mistake. According to Switcher.ie, 26 per cent of those polled said they were overcharged on at least one household bill last year. Even more troubling is the fact that more than a third of consumers admitted to being unable to work out if there had been a billing mistake: barely more than half (52 per cent) said they were likely to spot an error.

The survey is not the only thing to highlight problems with billing. A couple of weeks back, the Commission for Energy Regulation published its annual customer-care report. It shows that more than three-quarters of the complex complaints it investigated in the electricity and gas market last year involved inaccurate billing, incorrect account details, problems with budget plans and large catch-up bills following estimated readings.

And the latest statistics from ComReg show that in the first quarter of this year, consumers contacted its consumer line with 6,406 issues to do with landlines, mobiles, premium rate numbers and internet services. Of all the complaints, nearly 25 per cent related to billing and disputed charges.

For those who told Switcher.ie they were overcharged last year, the average amount was €54 for electricity, €36 for broadband and €30 for mobile phone, an overall average of €40.

That might not seem a huge amount of money, but if a quarter of households are being overcharged every year, some €10 million is wrongly going into the pockets of utility providers annually.

“Overcomplicated bills are a huge barrier in preventing consumers from engaging in the utility market,” says Eoin Clarke, managing director of Swirtcher.ie.

“A large percentage of people say their bills are difficult to check for accuracy, and this puts them in the vulnerable position of having to trust their suppliers to get it right.

“As our research shows, this doesn’t always happen, and people can end up out of pocket as a result.”

About 60 per cent of people now pay bills by direct debit, Clarke says. This is convenient, but it can make it harder to track what is going on – and what is going wrong – with your bills.

“With payments being taken from your account automatically,” he says, “it makes it even more important that consumers are able to check and understand their bills. If you don’t check your bills regularly, you could miss important information, like whether the bill is based on an estimated meter reading, if the account is in credit, whether an introductory discount has ended, or a cheaper tariff is available.”

The best advice Clarke can give is to check bills thoroughly “and don’t be afraid to ask a supplier if you find something you don’t understand”.

JOLT TO THE WALLET: KNOW YOUR ELECTRICITY BILL

Unit rate: Rate you pay per kWh (kilowatt hour) of electricity. Each tariff has a different unit rate.

Consumption/usage: Amount of kWh units you used during the billing period.

Standing charge: Combination of fixed charges for providing electricity and a share of the supply costs in servicing your account. They may vary by supplier. There are four different classes of electricity standing charges: Urban 24hr; Urban Nightsaver; Rural 24hr; Rural Nightsaver.

PSO levy: Subsidy charged to all electricity customers in Ireland, consisting of various subsidy schemes to support the State’s national policy objectives on renewable energy, indigenous fuels (peat) and security of energy supply. The current PSO annual levy charge is €60.09, and is the same across all suppliers.

VAT: 13.5 per cent VAT is charged on all energy products, including the PSO levy.