Bakers rise to the occasion as gluten-free craze takes hold 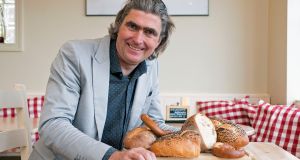 William Despard, of the Bretzel Bakery, with sourdough breads which he says would suit people with a mild intolerance to gluten. Photograph: Dave Meehan

Increased demand for gluten-free products has led Irish bakers to change their approach and business is booming, according to some of Ireland’s leading bakeries.

Although only one in 100 suffer from coeliac disease, Michael McCambridge – the owner of McCambridge bakery – has witnessed an surge in the demand for gluten-free breads.

“We haven’t seen a volume impact, but we have seen a change in our approach,” said McCambridge.

Three years ago, he started looking into alternative grains to wheat, barley and rye, all of which contain gluten.

McCambridge describes it as a “thoroughly Irish product . . . that ticks a lot of boxes in the gluten area”.

McCambridge is understanding of coeliacs , yet is unsure of the approach of people who simply delete wheat from their diet for a perceived wellness effect.

“Their logical move is to cut out bread, which isn’t the best answer,” he added.

Demand for bread also remains strong at Bretzel Bakery, an established Portobello-based company that does not produce any gluten-free products.

The recent increase in dietary concerns has led consumers to seek out high-quality breads and pastries, according to the owner William Despard.

“It has made for a renewed interest in people who are baking high-quality bread from scratch,” Despard said.

Bretzel Bakery experienced a 30 per cent growth in production last year, and Despard expects to see a further growth of more than 10 per cent next year.

He encouraged people to try breads with longer fermentation periods such as sourdough, which he says is easier to digest and can be better for people with mild intolerance to gluten.

However, McCambridge says: “It’s not going to be a fad. I think the pro-gluten-free cycle is here to stay.”