10 things we love and hate about online shopping

Online shopping turns 21 this year, but Irish consumers have been slower than others to do their buying on the web. They’re quite right. And quite wrong 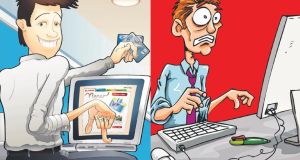 Love/Hate: Shopping online is fast and easy (although sometimes, perhaps, too fast and too easy). Illustrations: Getty, Thinkstock

Online shopping turns 21 this year. According to the New York Times, Phil Brandenberger of Philadelphia was the man who made retail history on August 11th, 1994, when he spent $12.48 on a Sting CD from the Net Market Company in New Hampshire. He used an encryption code to pay.

“Even if the NSA was listening in, they couldn’t get his credit card number,” said Daniel M Kohn, the 21-year-old chief executive of the web trader.

Kohn, bless him, may have wildly underestimated the reach of the NSA, but he was right when it came to the potential of online shopping and the importance of encrypted transactions for the development of ecommerce. He later left the game in favour of a career as a venture capitalist, but others were quick to pick up the baton.

Just 11 months later, Jeff Bezos began selling books from a two-bedroom rented property in Seattle. Today, his company, Amazon, is worth well over $150 billion (€132 billion). Ebay, the world’s largest and most eclectic marketplace, is not far behind.

According to a 2014 UPC report on Ireland’s digital future, 59 per cent of Irish adults shopped online at least once a month last year, spending €5.9 billion. We are far behind the US, where close to 200 million people spent more than €300 billion online last year. Globally, the online spend last year was $1.5 trillion.

Online shopping has many advantages, but it is not always all it is dressed up to be.

1 It has made couponing cool, or at least not terminally uncool. If you use deal sites such as Living Social, Groupon or (shameless plug alert) the Irish Times- owned Rewarding Times wisely, you can save huge amounts of cash.

2 You can shop late at night wearing nothing more than a smile and a glass of wine; no one will look twice at you (unless you live with a prude who frowns upon naked, drunken shopping).

3 Most employees frown upon staff slipping out for an hour to browse the shops or pop into a travel agent to plan a summer jaunt. But if you’re careful about it, you can fill all your retailing needs on someone else’s dime. Not that Pricewatch would ever consider it.

4 You know the drill. You buy something and it stops working after a few months but you can’t bring it back because you’ve no idea where the receipt is. If you have a readily searchable email inbox and aren’t stupid when it comes to deleting mails, that problem disappears.

5 You have more rights shopping online than offline. Buying on the web, at least within the EU, means you have a cooling-off period of 14 calendar days during which you can cancel the order and get a full refund. For goods, the cooling-off period ends 14 days after you receive the purchase; for services, it ends 14 days after the service starts. There are exceptions, including flights and concert tickets.

6 You never have to talk to sales people. Men will most likely see this as a benefit; retail studies have shown there is a gender divide when it comes to willingness to engage with salespeople.

7 When you buy clothes online, you can try them on in the comfort of your own home, allowing you to circumvent cramped changing rooms policed by sales assistants who will tell you black is white in order to make a sale.

8 Online shopping is, generally speaking, cheaper than its offline equivalent, particularly if you are able to source whatever it is you want to buy outside of this country and can circumvent the “living in Ireland tithe” that many retailers impose upon us.

9 Finding exactly what you want has never been easier, and the choices and options available to the online shopper are dizzying. You can take to the web with only the vaguest notion of what you are looking for and have it in your possession – virtually, at any rate – after just a few clicks.

10 Grocery shopping online is faster and less hassle than taking the traditional route. Ireland is not, however, well served when it comes to grocery retailing: just two players (Tesco and Supervalu) are active in that space.

1 You can shop drunk. While ease of shopping is one the best things about the online world, it is also one of the most dangerous. There is much to be said for having to make the effort to get off the couch and go in search of something in the physical world.

2 More than 100 billion spam emails are sent every day, offering you the chance to buy cheap Viagra and gawp at Taylor Swift naked while losing weight and inheriting suitcases full of blood diamonds from the widows of recently deceased sub-Saharan dictators. Spam accounts for more than 70 per cent of all emails sent, according to the IT firm Kaspersky Lab.

3 And spam isn’t the only problem. What about all those emails from entirely legit organisations that you have signed up to receive? There are flight sales, clothes discounts and restaurant deals pushed into your face hourly. Yes, yes, we know unsubscribing is easy, but what if you miss something amazing?

4 You can’t actually touch the products you’re buying or try them on until they arrive.

5 Deal sites are a double-edged sword. If they are used wisely, they can lead to big savings. But many people buy products they don’t really need just because of the discounts. And as time progresses, the quality of the deals offered by some services are stretched a bit. Do you need to spend the first part of your day being sold colonic irrigation, teeth-whitening, and discount STI tests?

6 If you buy from big international retailers, where does the money go?

7 Research conducted by the Competition and Consumer Protection Commission indicates that many of us are unaware of, or unclear about, our rights when shopping online. Last November, research by the commission found that 39 per cent of online shoppers were unaware that they could change their minds, while most of those who knew they had that right had no notion what the cooling-off period was.

8 Under EU law, you should receive the goods no later than 30 days from when you buy them. For many people who struggle with delayed gratification, that can be a problem.

9 The EU’s Consumer Rights Directive covers only purchases from sites in the EU. If you buy from farther afield, you’re on your own.

10 We waste a lot of time “shopping” online. A recent survey found that millennials – those “digital natives” who are supposed to be good at the web thing – regularly browse for stuff they don’t plan on buying. And then there is all the time wasted sending back the stuff we decide we don’t want.