Boy alleged to have gone to toilet 20 times during game 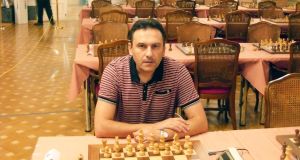 Chess player Gabriel Mirza, the teenager’s opponent, was expelled from the tournament

The Irish Chess Union is to hold a meeting of its executive committee today after gardaí were called to a top chess tournament following claims a 16-year-old boy was caught cheating.

A row started after the Dublin schoolboy, who was said to have gone to the toilet “at least 20 times” during a game, was allegedly caught using an Android device to check his next move on a chess engine.

The teenager’s opponent, Gabriel Mirza (47), who was expelled from the tournament because of his reaction, admits he pulled the schoolboy from a toilet cubicle at the Metropole Hotel in Cork, but insists he never assaulted him.

The prize money on offer at the Cork Chess Congress on Sunday was €400, the second biggest prize in Irish chess.

“It is a very serious incident. I was stopped from wining the tournament. But the main problem is about cheating. I showed to the chess world the truth..I am waiting to see the reaction from the Irish Chess Union,” said Romanian-born Gabriel Mirza, who has been living in Limerick for the past 15 years.

“After each move this guy was leaving the room. I went a few times around to where his pals were playing, but he was not there. I went to the toilet where there was just one locked. I entered in the next cubical, climbed on the toilet to watch over to the one which was occupied, and surprise he [was there] with an android checking the moves with a chess engine.”

A qualified PE teacher, Mr Mirza said his first reaction was to jump over the inside of the cubical but he wanted a witness so he went straight to the controller and asked him to “follow me immediately”.

“I just grabbed him from the toilet, I did not assault him. I made a citizen’s arrest as I had witnessed him committing a crime of dishonesty.”

The Romanian national who has Irish citizenship said he gave a statement to gardaí.

Gerry Graham, arbiter for the Cork Congress, expelled Mr Mirza from the tournament over his reaction.

In an email to Mr Mirza explaining why he was not allowed to play in the final round of the tournament, Mr Graham quoted article 12 of the Laws of Chess which governs the conduct of players and states players shall take no action that brings the game into disrepute.