Ricky McDermott (17) was last seen in Virginia, Co Cavan, while on a night out 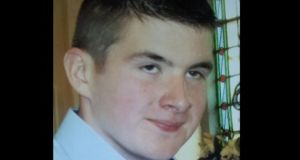 A body has been found in the search for a 17-year-old boy who has been missing in Cavan since the early hours of Monday morning.

Ricky McDermott from Clonabreany, Crossakiel, Oldcastle, Co Meath, was last seen on Church Street, Virginia, Co Cavan between the hours of 12.30am and 1am.

He had been on a night out with friends on Easter Sunday night but separated from the group when he was refused entry to a nightclub.

His father Richard and his friends began the search around the Virginia area on Easter Monday morning for the teenager who played both GAA and soccer in the area with Ballylough Mullagh in Cavan and Collinstown United in the Meath & District League.

A body was located in the River Blackwater at 5pm yesterday by the Boyne Fishermen’s Rescue and Recovery service. A post-mortem was carried out on the remains at Navan Hospital this morning to establish the cause of death.