Kenny hopes banking report will be published by deadline 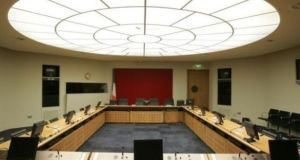 Members of the inquiry believe the timeframe to publish the final report is still too tight. Photograph: The Irish Times

Taoiseach Enda Kenny has said he hoped the banking inquiry will publish its report in the time given to it of the end of January 2016.

“The banking inquiry was triggered by Government but was set up by the CPP (Committee on Procedures and Privileges),” the Taoiseach said.

“The members of the banking inquiry operate completely independently of Government. I would hope they would be able to produce their report within the timescale allocated to them by the Government.”

Asked whether he would implement recommendations arising from the report, Mr Kenny said he would have to wait and read what the final report said.

Earlier on Monday banking inquiry chairman Ciaran Lynch said he hoped the final report would be published by the end of January.

Speaking on RTÉ Morning Ireland, Mr Lynch said the final 450-page draft report, which was amended over the weekend, was due for publication and to be brought before the houses of the Oireachtas in the final week of January.

The executive summary which was to run to 15 pages was abandoned as the amendments being sought by members could not be agreed in time.

This has been replaced by a preface written by Mr Lynch which members of the committee have agreed to.

The Oireachtas banking inquiry members reached an agreement on the report late on Sunday, although three chapters in the report are the cause of “significant concern”.

Asked to comment on a reported recommendation that the Attorney General should take legal action against the European Central Bank over its refusal to allow Ireland to “burn” senior bondholders, Mr Lynch said it would be “wholly inappropriate” to discuss elements of the report in advance of publication.

Mr Lynch gave a general outline of what the report would look like, saying it consisted of 11 chapters with “a clear and explicit list of findings and recommendations”.

“The report is now with senior counsel, it comes back following their review this week, that review then will be examined,” explained Mr Lynch. He said the report would then be brought for consultation with a two-week period for submissions.

“The committee then will take on board and examine the consultation process, it may lead to some adaptation of the report or indeed it may leave the report in the shape that it’s actually in at the moment,” he said.

“It then goes into a 21 day standing still period so the committee will need to meet over the Christmas period to consider whatever information comes back as part of the end of the consultation process.”

Mr Lynch said the final report would be published the same day it was laid before the Dáil and the Seanad.

He admitted to not having discussed the matter with the Taoiseach but said an extension had been agreed with Mr Kenny to allow the committee to complete the report.

“That extension was until the end of January, that motion was moved in the house by the Taoiseach himself and it was voted upon and agreed and accepted by the house so everyone is aware as to what the timeline of the inquiry actually is and the Dáil has agreed to accommodate that.”

Members of the inquiry believe the timeframe to publish the final report is still too tight. This is because the report must go out to interested parties by mid-week and any amendments sought will have to be considered over the Christmas period. The report must be published by January 27th.