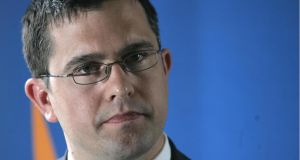 Another Fine Gael TD has declared his intention to vote against the abortion legislation, bringing to four the number committed to opposing the Protection of Life During Pregnancy Bill.

Dublin North East TD Terence Flanagan said last night that he would vote against the Bill when the second stage is put to the Dáil either today or tomorrow. He said he could not support the suicide clause which he said was the deliberate taking of the life of the unborn.

“This is wrong and unjust,” he said. “I am also conscious that Fine Gael made an election commitment not to introduce legislation legalising abortion.”

He appealed to Taoiseach Enda Kenny to allow a free vote. “Even at this late stage I think it would be the right thing to do,” he said.

Three of his colleagues have already pledged to vote against the legislation and there are doubts on a number of others.

Wicklow Fine Gael TD Billy Timmins declared on Friday that he had doubts about the constitutionality of the Bill and intended to vote against it. He told the Dáil he could not support the Bill as long as the provision on suicide remained.

Peter Mathews from Dublin South and Brian Walsh of Galway West have also said they will oppose the legislation due to the suicide clause.

Minister of State for European Affairs Lucinda Creighton is the most high-profile member of the party to have expressed uneasiness about the suicide clause and has publicly called for a free vote. She is scheduled to meet Minister for Health James Reilly today to discuss the prospect of amendments.

Ms Creighton has not said how she will vote but there is an expectation she will support the Bill on the initial second- stage vote in the hope there may be some amendment on committee stage.

Some other TDs with concerns have indicated they will vote for the second stage in the expectation that Dr Reilly will accept some amendments during the committee stage.

The second stage debate will continue as long as TDs wish to speak and it is not clear whether it will conclude today or tomorrow. There is a growing view among politicians that the Bill will ultimately end up being tested in the Supreme Court.

Labour TD for Clare Michael McNamara reflected that feeling yesterday saying it was inevitable that the Protection of Life During Pregnancy Bill will be tested in the court.