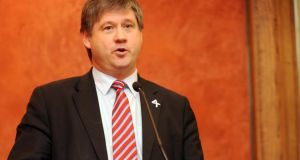 The Northern Assembly has rejected a Sinn Féin motion to legalise same sex marriage in Northern Ireland. The Assembly also voted against an Alliance amendment which would have permitted civil marriage for same sex couples but allowed churches to define marriage as they wished.

The Sinn Féin motion could not have succeeded as the DUP had lodged a petition of concern which effectively meant it could block the motion from being passed, even if a majority supported the proposal.

Voting generally broke down with unionists opposing the motion and nationalists voting for although three unionists supported the proposal, Basil McCrea and John McCallister, formerly of the Ulster Unionist Party, who are due to form a new unionist party, and Ulster Unionist Michael Copeland.

UUP Assembly member Roy Beggs junior said reference to the convention in the Republic was a “deliberately provocative” ploy by Sinn Féin and could have cost the party some unionist support for the motion.

“I am a British citizen. There isn’t any (Constitutional Convention) and the mere inclusion of that, even if I happened to agree with everything else that was said, means that I would vote against it,” he said.

Sinn Féin MLA Caitriona Ruane said attitudes in Ireland were changing because people did not want to see people discriminated against.

“The gay community has said enough is enough, they are standing up for themselves and their communities,” added Ms Ruane.

Alliance leader David Ford, who recently stood down temporarily as an elder at his local Co Antrim Presbyterian church because of his support for same sex marriage, accused Sinn Féin of engaging in “grandstanding” politics.