Ancient bog body found in Meath to be carbon dated 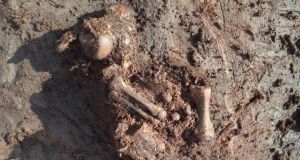 Experts from the National Museum of Ireland plan to radiocarbon date an ancient bog body found at a Midlands bog today. It is the second one to be found at the midlands bog in two years.

The partial remains, comprising of adult leg and foot bones and flesh, were discovered by Bord Na Móna workers at Rossan Bog close to the Westmeath border in Co Meath on Saturday.

Once the find was made, a Bord Na Móna worker initiated company protocol and called gardai to examine the scene. Work was stopped and the National Museum of Ireland was notified.

The find was made close to the discovery of a Bronze Age bog body in December 2012, later named Moydrum Man, which was radiocarbon dated to between 700 and 400BC.

A team of archaeologists and conservators from the National Museum of Ireland spent last weekend examining the find at the bog before removing the remains on Monday.

They have yet to determine the gender or age of the body, but are convinced the remains are those of an adult.

Further analysis of the bog body will now take place in the National Museum of Ireland’s conservation laboratory at Collins Barracks, Dublin.

Maeve Sikora of the museum’s Irish antiquities division, who led the museum’s fieldwork team, thanked Bord na Móna staff for promptly reporting the find and providing assistance at the site.

National Museum of Ireland Director Raghnall Ó Floinn welcomed the new discovery and said, “every new find helps to bring us closer to understanding the lives and belief systems of our ancestors.”

Oxygen-free conditions in bogs assist in the preservation of organic material such as human tissue. The survival of such remains allows for more detailed research into past lives than if only the bone was to survive.

Bog bodies have been found across northern Europe from Ireland to Scandinavia. Many show evidence for violent death and are believed to be sacrificial offerings connected to kingship and sovereignty.

Man United’s latest Parisian party more impressive than heist of 2019 09:45
Minister ‘deeply concerned’ about speculation on Ulster Bank future 09:43
Lions to play Japan on home soil before tour to South Africa 09:26
Tiger Woods in the groove as he plots a path to Augusta 09:22
Trinity College and DCU yet to outline student accommodation refund policy 09:11