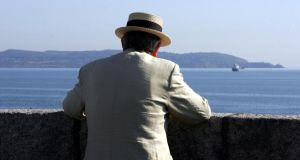 Looking from the James Joyce tower at Sandycove, Co. Dublin, across Dublin bay, the “bowl of bitter waters”, as it is described in Ulysses, to Howth. Photograph: Eric Luke 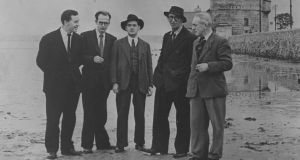 The week-long festival into which Bloomsday has grown, peaks tomorrow on June 16th – your actual Bloom’s Day itself.

At the James Joyce Centre on North Great George’s Street in Dublin city centre, they’ll be serving “a traditional full-Irish Bewley’s Bloomsday Breakfast, complete with all the Ulyssean fare you’ve come to expect – yes, icky inner organs and all”.

Leopold Bloom, as all schoolchildren know from studying their Ulysses, had a thing about kidneys at breakfast.

“And as you eat with relish and savour the fine tang of the grub,” promises the centre, “our troupe of Joycean players will serve up a platter of scenes from Joyce’s masterpiece.”

The Promenade Café in Dún Laoghaire promises “a Special Leopold Bloom Breakfast!” and in Bray, there will be what is billed as “general merriment” as the local branch of Superquin hosts a buffet, with the Royal Hotel servingJoycean afternoon teas.

What would the man himself make of it all? It’s a far cry from his early days in Paris where, like many an artist before and since, Joyce eked out a precarious existence, lurching between occasional fine dining and, more usually, penury. A glimpse of what it was like for Joyce may be gleaned from letters he wrote in December 1902 while staying at the Grand Hotel Corneille, on the street of the same name on the Left Bank.

His first letter, to his father John Stanislaus Joyce, was dated December 3rd. In it, he urged Joyce snr to get Stannie, as James refers to his brother, to collect some money from the Daily Express, for which James wrote occasional reviews, and get it to him in Paris post-haste.

And in a notable detail in the letter, he instructs father Joyce to tell mother Joyce about “a déjeuner of seven courses today”, adding: “So much saved!” appearing to suggest that the effect of one big meal would last a while.

In another letter three days later to his entire family (Dear Everyone, it begins), he again dwells on the matter of eating. He mentions breakfast costing three pence; déjeuner (soup, meat, dessert and coffee) for eight or nine pence; and dinner (soup, fish, meat, vegetables, dessert and coffee) for one shilling. He described liking black coffee with sugar, which he suggests helps with the weather.

Finances are grim by the 21st, as is clear to another letter to his father, this one written during a brief stopover in London. The cause of his liquidity problem he explains as “among other things the little Parisian shopkeepers passed old louis off on me and once or twice Italian lire. . .”

Back in Paris in the New Year, Joyce wrote to Stannie on February 8th, 1903, and had a grand old rant about the Rev Joseph Darlington, one of his philosophy lecturers at UCD, George Russell (the poet and critic AE) and Joyce’s college pal, the writer Francis Skeffington, the latter two both non-meat eaters.

There is a nice vignette of our hero’s occasional bullishness on openculture.com, a US-based literary website. A 17 second film clip from an unspecified date in the 1920s, shows a rather dapper looking Joyce whom an American narrator tells viewers used to go drinking with Ernest Hemingway. The narrator then adds: ”. . . the author of Ulysses was a small thin unathletic man with very bad eyes. When in the course of their drinking they ran into any sort of belligerence, he would jump behind his powerful friend and shout: ‘Deal with him Hemingway, deal with him’.”

So if the icky inner organs are not to your taste tomorrow, leap to the rear of the nearest macho-male and demand in a shrill voice that he deal with it pronto.

'Beautiful soul with bright career ahead' – tributes paid to stabbed teenager 17:46
Tourism sector calls for international travel to resume in second half of 2021 17:29
Putin warns of ‘all against all’ fight if global development is neglected 17:22
Most water extraction to go unregulated, environment groups warn 17:22
Hauliers going to France will need negative Covid-19 test from Thursday 17:00