What’s the story? The books we’d like to get this Christmas 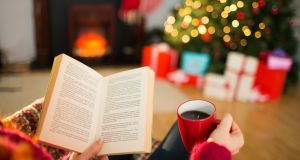 Author
Giving I want the whole world to read Milkman, by Anna Burns: it really is that dazzling. Another beautiful offering from Northern Ireland is David Park’s Travelling in a Strange Land, though I accept that it’ll make my giftees cry buckets. And Women Talking by Miriam Toews is a book to fall in love with: thoughtful, witty, and exceptionally moving.

Getting I’d stray from my beloved fiction for People Like Me by Lynn Ruane; Craic Baby, Darach Ó Séaghdha’s follow-up to the brilliant Motherfoclóir; and, because I eat with my eyes, The Currabinny Cookbook.

Television presenter
Giving Books are such a great present at any time of the year. Rita and I get books for Mícheál Óg on a weekly basis – there are more books in his bed than fingers and toes! We had RTÉ weather presenter Joanna Donnelly on the show with her brilliant book, The Great Irish Weather Book. I was a weather presenter myself for 11 years and so this might be one reason why I love it, but I also think we are obsessed with the weather in Ireland, so this is the book I’ll be gifting this Christmas.

Getting The book I’ll be hoping to receive is Play it Again, Des, Des Cahill’s autobiography. I’ve been a fan of Des’s for years. He’s always in good form and comes across as very genuine.

Lord Mayor of Dublin
Giving Ray Bateson’s Battle of Moore Street is the second book in the Kilmainham Tales special collection and is a bi-lingual history of the dramatic events in Moore Street – in the heart of Dublin – in 1916, where the Provisional government of the Irish Republic finally decided to surrender.

Getting Just published, Michael Barry’s latest book, The Fight for Irish Freedom, is a book I would like to receive as we approach the centenary of the War of Independence. I know that Michael’s work will add greatly to my knowledge, understanding and appreciation of this important period in our struggle for freedom.

Poet
Giving Reporting the Troubles, edited by Ivan Little and Deric Henderson, is an extensive collection of personal accounts by journalists of their experiences. Nessa O’Mahony’s debut crime novel The Branchman and Jane Robinson’s debut poetry collection Journey to the Sleeping Whale.

Getting The exquisite Blood Horses – a limited-edition book by poet Moyra Donaldson and artist Paddy Lennon. Oh, and if Santa is reading this, may I also have Sweet Home by Wendy Erskine and Kit de Waal’s The Trick to Time.

Cofounder, Tramp Press
Giving I’ve a terrible memory so I keep a list of the books I’ve read throughout the year. One of my favourite parts of Christmas now is comparing notes with my father, who also keeps a list. My favourites of 2018 – I’ll be buying in bulk to give them as gifts – are the stunning Her Body and Other Parties by Carmen Maria Machado, Educated by Tara Westover, and This Hostel Life by Melatu Uche Okorie, out from new Irish indie Skein Press.

Getting Every time the gang on my favourite podcast Pop Culture Happy Hour talk books I rush to write them down – they’ve got great taste. (I’d also recommend getting in touch with trusted local booksellers, like Liam over at Hodges Figgis, or Gary Perry, head of fiction at Foyles in London, who recommends via his Twitter feed as well as in person.) On my wishlist: Pat Barker’s The Silence of the Girls, Circe by Madeleine Miller, and Vox by Christine Dalcher.

Television and radio presenter
Giving Sally Rooney’s Normal People was longlisted for the Man Booker Prize, so I bought it to see what all the fuss was about. Although the main characters are millennials, I found myself identifying easily with Marianne and Conall on their third-level journey. I know I invested in the characters, so I think it’s one most people will love.

Getting Reporting the Troubles, edited by Deric Henderson and Ivan Little. I grew up in rural Co Tyrone in the 1980s and I am fascinated with the work of journalists who covered what was happening around me and how they set about finding the facts in a world of raw emotion and tension. Such an important work.

Crime writer
Giving David Park’s Travelling in a Strange Land was a beautiful, intensely human study of fathers and sons that I’d gladly share. Two crime novels that really took off this year and would make perfect stocking fillers are Steve Cavanagh’s tense Thirteen and Claire Allan’s Her Name Was Rose, which looks at the dark side of social media. And James Lee Burke’s newest, Robicheaux, certainly did not disappoint.

Chef and hotelier
Giving Home Economics for Life by Neven Maguire. It’s a book every parent should have at home, it’s packed with life skills, step-by-step recipes and amazing pictures. It’s a book that will be in Irish kitchens for generations to come.

Getting I spend a lot of time on the road going to food festivals so a guidebook that would show me where to eat in every town, village and city in Ireland would be a real treat. I’ll be asking for John and Sally McKenna’s Ireland the Best: The Insider’s Guide to Ireland. It’s going straight in the glove compartment in the car.

Author
Giving I’ll be giving Wendy Erskine’s debut short-story collection Sweet Home. It follows on from the wonderful Lucy Caldwell collection Multitudes, centring itself on Belfast. Erskine’s stories depict a Belfast I recognise, with stories that need to be told –the kind I’ve been searching for since moving back home from England.

Getting I’ve been hearing wonderful things about Ghost Wall by Sarah Moss. And if someone could pre-order me Sinéad Gleeson’s collection of essays, Constellations, out in April and Kerry Hudson’s memoir Lowborn: Growing Up, Getting Away and Returning to Britain’s Poorest Towns – out in May – I’d be very happy.