What’s on: Something for the weekend

Football League finals, film festivals, The Field and a céilí in Kilfenora 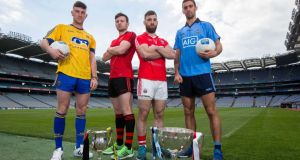 Roscommon’s Neil Collins and Donal O’Hare of Down with Cork’s Colm O’Driscoll and James McCarthy of Dublin, who face eachother in this weekend’s Allianz Football League finals. Photograph: Ryan Byrne/Inpho

It ain’t all about tasty crustaceans- the idyllic seaside town of Howth transforms into a veritable wonderland of merriment and festivities over the course of the weekend.

For those genuinely enthused by some appetising prawn dishes the main tent provides a selection from around the world. Aspiring chefs can witness cooking demonstrations from seafood sages, and there’s plenty for the kids with a funfair, storytelling and some interesting nautical exhibitions.

Featuring an appearance from Holocaust survivor Tomi Reichental, this literary festival offers plenty for those who appreciate the written word. A number of other international novelists will also be making an appearance, and attendees can witness some interesting workshops on topics such as censorship in Ireland and how to get published.

Events run over Friday and Saturday at various venues across Cork city. Booking is required.

When it comes to the visual arts, Shannonsiders are well and truly up there with the best of them. Last year’s City of Culture hosts the sixth instalment of this annual event, with a guest speech from home-grown writer and director Kevin Liddy kicking off Friday’s proceedings.

Screenings continue at LIT’s campus on Saturday with the premiere of The Pigtown Fling, which examines the influence of the 2014 City of Culture tenure on Limerick’s musical artists.

The Irish Times’ very own Michael Harding leads an accomplished cast as ‘The Field’ takes to the Gaiety Theatre stage for its opening weekend.

This retelling of John B Keane’s classic tale runs until 16th May.

Concerts, céilís and craic abound in north Clare as the seventh edition of the town’s traditional music festival takes place from Friday to Monday.

Highlights include a performance from Frankie Gavin’s De Dannan at Kilfenora Hall on Saturday night, and open-air céilí on Sunday afternoon and a singer’s night- hosted by writer Joseph O’Connor this evening.

If a punishing test of stamina in difficult terrain is your thing, you’d be well advised to sign up for either of the 21k, 41k or 62k races happening in Donegal on Saturday.

The endurance events feature a range of different disciplines including running, hiking, biking and kayaking. It’s a tough one, but contestants are treated to stunning views of the West Inishowen Peninsula while they slog their way to the finish line on the top of Sliabh Sneacht.

That said, participants are encouraged to know their limits, and the 62k extreme route is certainly not for beginners. Registration remains open.

As the heady days of summer draw ever-nearer, some of the GAA’s true heavyweights battle it out in search of a morale-boosting league title triumph in advance of the Championship.

The showpiece event sees reigning champions Dublin welcome Brian Cuthbert’s Cork side to the capital on Sunday, a highly-anticipated contest which will be preceded by the Division 2 finale featuring Down and a rejuvenated Roscommon side.