What I learned while cycling through the Irish midlands

Too many Irish people flit between coastal city and coastal playground. Brian McIntyre jumped on his bike to explore the many beautiful bits in between 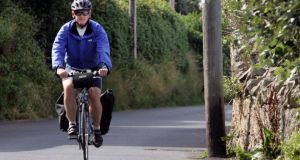 Brian McIntyre: ‘There is a quality to the people I met and observed on this trip that stands apart.’ Photograph: Eric Luke

I took to the saddle to escape Dublin. My beloved city had become a summer cocktail of moaning, road works and panic about seagulls carrying off babies. The plan was to ride away from it all, burrowing deep into the interior of our country.

My destination – the midlands, midwest and northwest – is a corridor known mostly for its motorway exits and service stations.

We live in a culture that flits from coastal city to coastal playground. Using Ordnance Survey maps, pedal power and a desire for the byroad less-travelled, I spent eight days and 600km exploring the heart of Ireland. I found it full of beauty, soul and suffering.

To cycle is to live a multisensorial life, rich in detail. Near the Dublin-Meath border, I marvelled at the constant battle of blues and greys in the sky overhead, the dry, woody smell of freshly-cut barley, and the damp sensuousness of a meadowsweet-laden byroad after rain.

1. Economic recovery is a long way off

I arrived tired into Castlepollard, Co Westmeath, grabbed a sandwich and sat on a town square bench. I saw a group of young adults in the distance, queueing. A line of people in such a tranquil setting seemed odd.

I approached, to discover that it was for the local welfare office. Slowly, one by one, those young people entered – and in equal tempo, more arrived in their stead.

Throughout my trip, I saw much evidence of real hardship. In the back roads, I came across a shocking number of stand-alone, newly build houses abandoned and boarded-up, weeds and gravel in place of landscaped gardens.

In each house, no matter how uniform the architecture, I saw the lost dreams of someone, conjured in their unique choice of stone cladding.

In Castlerea, Co Roscommon, the local hotel closed last winter. I spoke to a dynamic young shopkeeper there about economic recovery, which is much talked about in the media. “It’s coming,” he told me. “You can see it in any of the cities. But I’d just like it to arrive here quicker.”

There is a quality to the people I met and observed on this trip that stands apart. Across Ireland, people are generally friendly to outsiders. But here, in the heart of the country, they go a step further. They are downright kind.

This is measured in the warmth and care they offer to their own elderly, in the time spent chatting with strangers like me, and in their impulse not to let you depart without giving you something – water, food, directions. Kindness like this is an accumulation of small acts.

3. The midlands are multicultural

I encountered a deeply moving multicultural Ireland. I met people from central Europe, India and Brazil. They add such richness to the experience of travelling inland, and have even adopted the local habit of lifting the index finger from the steering wheel to say hello on the road. I take this as a rather positive sign that they’re settling in.

In the northwest, I came across a big top belonging to Corvinni’s “all human” circus. It stood empty and silent in a field, in the middle of nowhere.

Up the road, I stopped and asked two local women what it was all about. Apparently, the circus practises here before going on tour around the country.

The women described the lovely sounds of trumpets in the evening, drifting over the fields, as the circus players put themselves through their paces. After a nice chat I began to set off again.

“Now,” said one of the women. “What can I get you? What do you need? Water? Food?” 4. Supermarkets are the centre of life

To get the measure of a town, spend some time in its principal supermarket. I grabbed lunch in the vestibule of O’Toole’s in Tuam, Co Galway, and watched life go by. A delivery man gave directions with unending patience to a woman who seemed to confuse right with left.

A Spanish student triggered the security alarm with his crucifix.

A young man politely asked me about my cycling. Mid-chat, we were interrupted. “Did you do it?” a young woman demanded vehemently. “Everyone thinks you done it!” I had no idea what it all meant, and it was impolite to ask. Just then, the sun came out and it was time to go. I felt I was leaving the first chapter of a compelling novel, never to know how the plot or characters might progress.

That afternoon, in east Galway, I cycled through a web of bogland. The cutting and clamping of the turf had created a multitude of mini turf mounds, all arranged with military precision. Each pagoda-like construction resembled a tiny work of art, conceived only to make love to a reticent sun.

The effect of so many turf mounds together was mesmerising. I left the bike by the bohareen, and took a closer look.

Standing in the middle of the bog, I paused to smell the dank peatiness in the air. I was completely alone. There was surprising comfort in feeling unsolid ground underfoot, a welcome break from the steel and asphalt that had brought me to this beautiful, empty place.

Culinary hits of a hungry cyclist

1. The lovely, authentic fare and friendly service at Spice India in Longford town.

2. The rhubarb and vanilla jam (and other organic produce), bought via an honesty box on the roadside in Kilmaine, Co Mayo.

3. The Rathcroghan Visitor Centre in Roscommon, where an eloquent gentleman will delight you with passionate detail of Irish (Táin) mythology and serve you a knock-out salad at the same time.

4. The golden brown fishcakes served with grace and friendliness at Gleeson’s Townhouse in Roscommon town.

5. An evening craft beer in the Lodge at Ashford Castle, Co Galway, looking out at a very chic water feature, and beyond to the best water feature of them all: Lough Corrib

Dining out: 12 of Dublin’s best restaurants with outdoor spaces
6

Wines for the weekend: Six French star buys to try
9