Weekend in . . . Berlin, a place for the strange and libertine

Believe all the hype, the German capital is a hipster idyll – but in a good way, writes Charly Wilder 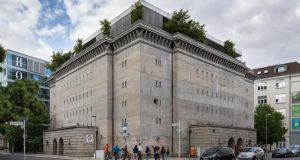 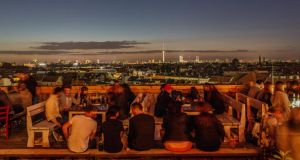 In Neukšlln, take a lift to the top of a garage and enjoy the 360-degree view. Photograph: Andreas Meichsner for the New York Times 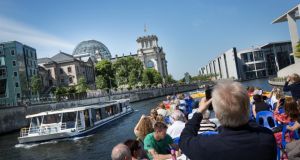 Take a winding tour of Berlin by boat. Photograph: Andreas Meichsner for the New York Times

There are few cities that transform themselves as profoundly from season to season as Berlin. The purgatorial winter, with its lightless days and frigid nights, gives way to four months of balmy intoxication. Cafe and gallery culture spills out into graffitied alleyways; the parks fill with techno disc jockeys, nudists and picnicking families; and young people arrive by the planeload from Brooklyn, Copenhagen and London to take part in an open-air night-life scene that is equal parts Paris Is Burning and A Midsummer Night’s Dream.

But even as the hype of the last decade has made the city a magnet for tourists, Berlin remains a place for the strange and libertine, where the radical left still nips at the heels of neo-liberalism, where snapping photos in public is often more taboo than smoking a joint, and where people seldom ask what it is you “do.”

FRIDAY
3pm
Volk on the water Come summer, Berlin’s 200km of inner-city waterways turn into a thoroughfare thronged with kayaks, tourist vessels and the occasional party raft. A one-hour boat tour starting and ending at the Hauptbahnhof pier, offered by Reederei Riedel for €12 a person, allows you to take in the city’s historic centre while relaxing with brezel and bier. You’ll pass the Reichstag, Germany’s Norman Foster-redesigned house of parliament, once burned down by the Nazis and later bombed by the Allies; the old border crossing at Friedrichstrasse station known as the Tränenpalast (Palace of Tears) where East Germans once bid doleful goodbye to their Western visitors; and Museum Island, which houses the city’s great collection of antiquities. Check out progress on the Stadtschloss, or City Palace, the massive, controversial project to resurrect Berlin’s imperial palace, scheduled for completion by 2019.

5pm
Orient on the canal Every Tuesday and Friday, the Turkish Market spreads out along a stretch of the Landwehr Canal in the fast-gentrifying Kreuzkölln neighbourhood, where the old leftist-bohemian district of Kreuzberg meets Neukölln, an area long populated by Turkish, Kurdish and Arab immigrants. Residents descend on market days, as louche Australian graphic designers and matriarchs in headscarves haggle with men hawking their wares in a loud Turkish-German patois.

Afterward, cross the Kottbusser Bridge for a drop-in at Hard Wax, a revered record store in a canalside courtyard that’s a haunt for the DJs and audio geeks.

10pm
Beau monde booze Grab an exotic nightcap at Le Croco Bleu, a rakish cocktail bar that opened in 2013 in the cavernous former engine room of the 19th-century Bötzow Brewery building in Prenzlauer Berg. The newest venture by Gregor Scholl, the man behind the cultish bar Rum Trader, Le Croco Bleu has the feel of a post-industrial curiosity cabinet: teardrop crystal chandeliers, exposed pipes, disused machinery and taxidermied beasts. But the cocktails are the main event. The monthly rotating selection features rare extravagances like the Prince of Wales, a heady mix of Pierre Ferrand 1840 Cognac, Dry Orange Curaçao, DOM Benedictine and Champagne.

SATURDAY
10am
Modern times What city experienced the 20th century with more ferocity than Berlin? See that history refracted in two starkly different art collections. Reopened in 2015, the refurbished public Berlinische Galerie houses works by 20th-century artists of the Berlin Secession, Expressionist, Dada and New Objectivity movements: the haunting Weimar-era oil portraiture of Otto Dix, George Grosz’s pen-and-ink prostitutes and automatons and Hannah Höch’s radical photomontages, among other gems (€8). Then, if you’ve wrangled a spot on the month-long waiting list, fast-forward to the 1990s and beyond with a visit to the Sammlung Boros, a stunning private collection housed in a former Nazi bunker, which includes vivid installations by Olafur Eliasson and Ai Weiwei, the photographer Wolfgang Tillmans’ intimate portraits of 1990s club kids and works by the Welsh conceptual artist Cerith Wyn Evans (€12).

1pm
Stone age brunch The paleo diet has taken hold in Berlin thanks largely to Sauvage. The restaurant serves up dishes like roasted bone marrow on rosemary-and-cassava-flour toast and paleo pancakes made with tiger nut, chestnut and cassava. Brunch is about €15. 2pm 7. Artful Lots In 2009, a group of ambitious gardeners took over a vacant lot in Kreuzberg and began its transformation into Prinzessinnengarten, a social-urban-agricultural venture, and now one of the city’s loveliest green spaces. Compost beds burst with organic herbs and vegetables. There’s a wooded garden restaurant and cafe, a recycling centre and spaces for workshops and community events, such as a recent collaboration with a refugee organisation whose protests against German asylum policy have thrust the issue into the public eye.

Cross the street for a browse through Germanic art supply heaven, Planet Modulor, a multistory “creative department store,” includes a bookstore, a cafe and a 3-D printing studio. 9pm 8. Fame on the Spree Fame, a restaurant inside a repurposed railroad storage facility that juts over the Spree, is the newest venture from the collective behind the techno club Bar25, which anchored the after-hours scene of the 2000s. Bar25 was closed as part of the controversial Mediaspree project, a city initiative to develop property once part of the “death strip” between East and West Berlin. The group wrested the site back from developers and opened Fame last May, along with a nightclub next door called Kater Blau. The electric-kool-aid-carnival-shack aesthetic prevails, and the restaurant’s Spree-side terrace alone makes it worth a visit. The rotating menu features dishes like mascarpone polenta with raw marinated Beelitz asparagus, and Argentine beef fillet in red wine reduction. Dinner for two with drinks is around €100. Afterward, have a go at Kater Blau or any of the other clubs that line the riverbanks of Friedrichshain and Kreuzberg.

SUNDAY
10am
Honour your elders They may lack the grandeur of old masters collections in other cities, but the paintings at the Gemäldegalerie must be some of the world’s most alluring.

Organised geographically and chronologically, the collection includes works by Caravaggio, Rubens and Raphael, but it’s the eastern half of the museum holding the 13th- to 17th-century German, Dutch and Flemish works that will take your breath away. Inscrutable beauties gaze out from religious works by Lucas Cranach the Elder. The sideways glance of a Hanseatic merchant seems to one-up his detractors across five centuries in a portrait by Hans Holbein the Younger, and Petrus Christus’s eerie Netherlandish maidens and demons evoke Bach, heavy metal and Alexander McQueen. Admission, €10.

Nothing costs more than €10, but like many of Berlin’s best local hangouts, Thai Park is plagued by rumours of imminent shutdown, so visit while you can.

2pm
By field and by sky In a city known for its unorthodox use of public space, two recent repurposings still surprise. Tempelhofer Feld, the grounds of the megalithic, bullet-pocked Nazi airport is now a park. In summer, it transforms into a Teutonic sports-scape where locals engage in activities you didn’t know existed (inline-skate-hang-gliding, anyone?).

Then, for a Narnia-like experience, take a lift to the top of a parking garage in a shopping mall in Neukölln. Follow the international cool kids, local families and graying ravers to Klunkerkranich, which sprawls across the roof like a slightly debauched summer camp, replete with bar, club, cafe, sandbox, arts space and a 360-degree view of Berlin.

Summer drought, winter floods? These plants will survive it all
9