This trail offers arresting views from Carrauntoohil west to the Blaskets 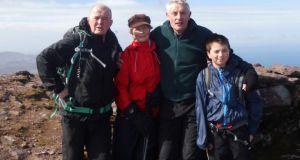 What would you say if a charming great-grandmother requested that you assist her with a cherished ambition to ascend Mount Brandon’s, Saint’s Road, with her 11-year-old great-grandson, Josh Hackett? You’d immediately say yes.

This is how I replied to Chrissie O’Meara, before realising I had only been up the Saint’s Road once before.

Concerned my skills would be found wanting on this most mercurial of mountains, I took the precaution of inviting experienced hillwalkers Ray and Maura Creaney to come along “just for the outing, of course – but bring the map and compass all the same.”

I needn’t have worried, for as we arrived awash with anticipation to Ballybrack (see panel) it was clear Brandon was in benign mood. Immediately, we were reminded of the spiritual significance of the mountain by an imposing Marian grotto and also a poignant monument to those who had walked this way in search of a cure from cancer.

Crossing a bridge, we continued through a gate to join a line of white posts that guided us across a small ravine to reach the first of the 14 Stations of the Cross leading to the mountaintop. Pilgrimage to Brandon dates from when the pagan deity Crom Dubh was reputedly evicted from his stronghold by St Brendan and a strong tradition continues of prayer at each station.

Pushing upwards, the Saint’s Road proved pleasantly undemanding and offered a well-defined path rising at a modest angle. Beyond, an impressive-looking standing stone, which Ray immediately dubbed “God’s finger pointing to heaven”, the going steepened. Soon we veered right and the path became increasingly rocky before coalescing with a wall and then swinging back left again. On the final push to the top, Josh bounded upwards and was ensconced at St Brendan’s oratory when I puffed on to the summit.

In a good mood, Brandon offers arresting views stretching from Carrauntoohil west to the staggeringly photogenic Blaskets and then north to the surreal outline of the Aran Islands. Today, was such an occasion and everyone agreed this was one of the finest views to be found anywhere in Ireland. Then Josh wanted to know the height of Mount Brandon and Ray saved the occasion by answering we were standing upon Ireland’s highest piece of real estate outside of McGillycuddy’s Reeks, which pleased the questioner no end.

As we descended, not only was Josh well ahead, but Chrissie also had me trailing her slipstream. Decided that further knowledge was required, I cunningly called on everyone to halt at “God’s finger”. I pointed to the ancient Cosáin na Naomh path that once conveyed pilgrims from the landing place at Ventry over Reenconnell Hill to the promised land of Brandon. As we completed our descent, we were united in the opinion this was one of the best outings we’d had in the Kerry uplands.

Coronavirus: What day of the week is it again?
9

'I contracted the virus, and then I lost my mum'
10