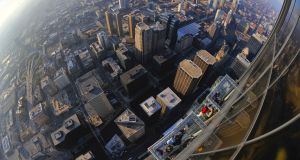 The woman behind the counter in Walgreens drug store on Michigan Avenue remarks on my accent and tells me she has been to Ireland twice, both times on whirlwind bus tours from London to Cardiff, over to Dublin and up to Belfast “a lotta time on a bus, I can tell you,” – and then she says she’s going back again this September. She loved the whole thing, particularly Dublin. “Wonderful,” she says, although you have to think her visit must have been super-short.

Then two things strike me. This is the second random chat I’ve had with a local and I’d only been in Chicago less than two hours at that point – the other was with a man in the lift at the swanky 1920s Drake Hotel, where we talked about Gone Girl , Chicago resident Gillian Flynn’s mega bestseller. So already Chicago is living up to its reputation for friendliness and general midwest niceness.

The second thing is that – like the Walgreens woman – while you can’t do everything on a short visit, and I was in Chicago for just two days, it can work like a sort of travel speed dating, making you decide instantly whether you like a place or not.

Mindful that Chicago is regarded as the birthplace of the skyscraper – and it still is a city of immensely tall and beautiful buildings – the fastest and most spectacular way to get a handle on just where you are, is to go up. At the John Hancock Observatory on the 94th floor of the John Hancock Centre on North Michigan Avenue (jhochicago.com), the views from the skywalk balcony are astonishing, especially at night if the weather is clear. It was when I visited, and the view was right to the other side of Michigan Lake. If I hadn’t seen that string of lights on the far side of the lake, 80 miles away, I would hardly have believed it’s a lake at all. During daytime it looks like a vast sea, fringed by sandy beaches with the wind whipping up waves on its surface.

If you’re a little braver, with a stronger stomach, there’s Skydeck Chicago, on the 103rd floor of the Willis Tower (it used to be called the Sears Building), where they’ve built three glass-walled and floored ledges up at 450 metres – like giant balconies that jut out from the building and give the slightly terrifying illusion that you’re standing on air. It’s an illusion reinforced when a cloud passed by, enveloping the breathtaking view in mist for a few seconds before floating on.

Chicago is a massive retail destination – in surveys it’s the number one reason people visit, followed by the restaurants, and then culture, which doesn’t really reflect the city’s cultural offerings, which are many, but says more about the sheer range of shops and food on offer. Chicago has the reputation as being the best shopping city in the US outside of New York and it has all the global brands lining Michigan Avenue, called with maybe a little bit of hyperbole, “the miracle mile”. Whole days could get swallowed up in just the Bloomingdales centre or the Watertower centre, but the shop I was most curious about was Burberry’s new flagship store which opened with a glitzy fanfare last November.

The luxury brand tore down its previous shop on the corner of North Michigan Avenue and East Ontario Street and the rebuild got Chicago talking. This is a city completely rebuilt after a fire in 1871 and steeped in architectural heritage, so any major build, especially on the city’s showiest thoroughfare, provokes debate.

The new Burberry is a sleek showstopper both inside and out – a five-storey gleaming black glass box with chrome patterned overlay echoing the famous Burberry plaid. Inside, giant screens blast digital images of fashion shows and zeitgeisty events. The brand has given only one of its other stores the same black box makeover – and that one is in Beijing, an indication of how seriously luxury brands take Chicago as a retail hub.

It’s such a walkable city and if you’re interested in design or the stories that these skyscrapers tell, you could stand in front of so many buildings and simply gawp – even on a freezing February day when the wind whips icy air up the wide streets – it’s not called the Windy City for nothing. So on a short trip you have to divide your time carefully.

The Chicago tourist board suggested the John G Shedd Aquarium, a vast place on the shores of Lake Michigan that was started in the 1930s by one of the city’s wealthy philanthropists and has grown since then to be home to more than 30,000 different animals from the world’s oceans. If you’re particularly interested in seeing everything from sharks to penguins, jellyfish to coral up close, or if you’re visiting with children, you could happily spend an entire day there – but if I had those three hours back I’d have headed out to explore the vintage stores and small galleries in the city’s hipster area, Wicker Park. Or made more time to explore the permanent collection at the Chicago Art Institute (artic.edu).

As time was short and the main part of the institute so vast, before heading for the new wing I nipped in to see Grant Wood’s American Gothic, a picture that has been spoofed so often, up close, it’s hard to believe it’s real.

There was just time on this trip to see the current special show, Picasso and Chicago , and feel a little sorry not to be heading back during the summer for the next blockbuster show, Impressionism, Fashion and Modernity (June 26th-September 22nd) – an exhibition created in association with the Metropolitan Museum of Art, New York, and Musée d’Orsay, Paris which mixes 80 of the world’s most recognisable art works with clothes from the period.

It would be particularly interesting to see that exhibit in a city which grew so rapidly from that period. Before you go – or while you’re there, the institute is one of the few places in the city with free wifi – download from iTunes the museum’s brilliant free app packed with information about the works on show.

After that, lunch at Terzo Piano on the top floor of the stunning Renzo Piano designed new wing of the Art Institute is a real, elegant treat.

In summer there’s a terrace where you can eat outside and look down over Millennium Park with its famous gleaming Cloud Gate sculpture, designed by British artist Anish Kapoor and known by locals as the jelly bean, and the Frank Gehry-designed Jay Pritzker Pavilion with its roof of elaborately curved stainless steel ribbons that looks like the most chi chi hat made for ladies’ day at the races.

With just a few hours left in Chicago, it was time to call on a local for a walking tour off the main drag. One enterprising visitor in our group, a film buff, had been in touch before he arrived with Chicago Greeters (chicagogreeters.com) – an organisation that puts volunteer locals in touch with likeminded visitors for a free tour and had great fun being shown the locations of various movies from Ferris Bueller’s Day Off to Spider-man 2 .

I was even luckier as an old colleague, David Staskowski, from our days on a design magazine in New York, now lives in Chicago. Our catch up walk took us along Lakeshore drive (“that’s where Oprah used to live”), through a residential neighbourhood lined with Victorian-era townhouses, over some of the red metal bridges that span the Chicago river, and past the vast art deco Merchandise Mart along the river.

This Chicago landmark opened six months after the Great Depression started – and it is still the world’s largest commercial building and the largest wholesale design centre. Although mostly open only to trade buyers, it does have a retail area open to the public and it’s the place to go to buy – or just to see – cutting edge interior design. Its restaurant, Nick’s Fishmarket Bar & Grill is high on the list for my next visit. Though once you start to make a wishlist of places to eat in Chicago, it gets long very quickly – the city has 21 Michelin-starred restaurants, including the famous molecular gastronomy temple, Alinea. Next time.


STAYING
The grand dame of hotels built in the 1920s and a Chicago landmark, the Drake Hotel is huge and old fashioned. Some rooms have views of Michigan Lake. The Drake Hotel , 140 East Walton Place, tel: 312.787.2200, thedrakehotel.com.

For something more contemporary the Radisson Blu Aqua, 221 North Columbus Drive on the first 18 floors of the stunning Aqua tower has a glamorous bar and lobby area for cocktails and calm rooms by Swedish designer Christian Lundwall, radissonblu.com/aquahotel -chicago.

Ian Schrager's makeover of the Chicago landmark Ambassador East Hotel is as cool and hip as you'd expct from the man who invented designer boutique hotels. The Pump room is smart place for lunch. Public Chicago, 1301 North State Parkway.

On a freezing Tuesday night the huge and atmospheric Quartino Ristorante & Wine Bar, 626 N. State Street, quartinochicago.com, was buzzing with a lively crowd. A fun Italian with a huge menu of mostly great pizzas and pasta, delicious risotto and an extensive wine list, sold by the carafe. Booking essential.

Air Lingus flies direct to Chicago, with additional flights added from the end of March to the end of October. Fares start from ¤259 each way. See the Choose
Chicago tourist board’s excellent website.
choosechicago.com