Fionn Davenport round up this week's travel deals and news 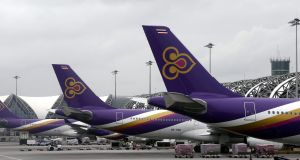 Thailand’s aviation industry has been accused of not complying with international safety standards.

FIVE PLACES TO EAT IN TOKYO

A ramen noodle bar in Tokyo has become the first restaurant of its kind to receive a Michelin star, which makes it 217 starred restaurants in the Japanese capital, the most of any city in the world. Even amid the accolades though, it’s possible to eat well without paying a king’s ransom. Here are five worth checking out . . .

Daiwa Sushi (Bldg 6, 5-2-1 Tsukiji, Chuo-ku; sushi set ¥3,500/€26). You can wait quite a while to get a seat at the famous sushi bar right in the heart of Tsukiji Market – and then you’ll be expected to eat in a hurry. But the wait and the rush are worth it. The set menu (seven nigiri, a maki roll and miso soup) is best if you can’t order in Japanese.

Harajuku Gyoza-ro (6-4-2 Jingumae, Shibuya-ku; six gyoza ¥300/€2.30). The menu is exclusively loaded with gyoza, or dumplings, but there are regular queues (especially at weekends) for regulars who know that they’d be pushed to find better versions anywhere else in the capital.

Ore-no-dashi (7-6-6 Ginza; oreno.co.jp/ en/eaterycat/dashi; dishes ¥400-1500/ €4-€11.50). A restaurant chain where you eat standing up mightn’t immediately appeal, but the gourmet dishes (especially the stews) are divine, and the wine list is excellent. There are seats if you absolutely must.

Otafuku (1-6-2 Senzoku, Taito-ku; otafuku.ne.jp; oden ¥110-550/€0.80- €4.20). This shack of a restaurant has been serving oden, or Japanese stew, for a century. Much like you would in a conveyer-belt restaurant, you pick what you want from the simmering pot, from radishes and kelp to scallops and tuna.

Tonki (1-2-1 Shimo-Meguro, Meguro-ku; meals around ¥1,900/€15). Tonkatsu – crumbed pork cutlet – is a Tokyo specialty and this place serves one of the best versions. For the best experience, sit at the counter and watch the chefs prepare your meal in perfectly choreographed style.

The home in Switzerland of British comic actor Charlie Chaplin is to be opened as a museum.

Chaplin moved to Le Manoir de Ban, on the banks of Lake Geneva at Corsier-sur-Vevey, in 1952 and he lived there until his death on Christmas Day 1977.

The new museum, called Chaplin’s World, will have lots of Chaplin memorabilia, screenings of his home movies and a rotating selection of special exhibitions. Visitors can also wander through the 35 acres of gardens, laced with covered pathways.

Thailand’s aviation industry has been accused of not complying with international safety standards. The United States Federal Aviation Authority red-flagged Thailand for being deficient in one or more critical areas and lacking the laws and regulations to make sure that its carriers – led by Thai Airlines but also including popular domestic carrier Bangkok Airways, which has an hourly service to tourist favourite Koh Samui – meet international safety standards.

Regulators in other countries are likely to follow the FAA’s lead in the coming months, which will be another blow to Thailand’s tourism industry following the military coup of 2014. About 60,000 Irish tourists visit Thailand every year.

Delta Airlines has announced that it will begin selling its Comfort+ seats as a separate class rather than as an add-on to economy bookings. Until now, carriers such as American, Delta and United sold economy plus seats (with extra legroom) as an add-on upgrade to economy passengers, usually for between $100-$200. In a move that will most likely be followed by its rivals, from next May Delta will sell Comfort+ as a new intermediate class pitched halfway between economy and business. The new class will feature priority boarding, extra overhead space, free drinks and premium entertainment. Delta has a daily service to New York from Dublin and a seasonal service to Atlanta; see delta.com

Hilton Worldwide says it has been the victim of a phishing scam. Guests who have stayed at a Hilton hotel in the last year are being urged to double-check their credit card statements to make sure there aren’t any fraudulent charges, in November 2014 and between April and July of this year. Also affected are hotels that are part of the Hilton group, including Embassy Suites, Doubletree, Hampton Inn and Suites and the upscale Waldorf Astoria Hotels & Resorts. Hilton Worldwide has launched an internal investigation into the scam.

Ashford Castle (ashfordcastle.com) has a winter/spring midweek two-night B&B package from €265pp sharing that includes a table d’hote dinner in the George V Dining Room, valid from January to March. Castle Durrow (castledurrow.com) in Co Laois is hosting two Italian- themed evenings on March 11th and 25th – enjoy a seven-course tasting menu and a B&B overnight from €290 a couple. Hayfield Manor (hayfieldmanor.ie) in Cork has a “He Says Yes” package for February 29th that includes overnight for two with champagne breakfast, a beauty salon treatment and manicure for her and a seven-course gourmet dinner for €999.

Stay Latrobe Apartment (183a Latrobe Tce, Paddington; stayz.com.au/77109; apt from $200). Two-room elegant apartment with all mod-cons in the heart of affluent Paddington.