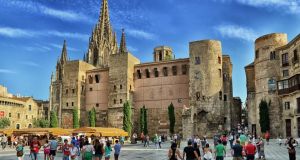 In Barcelona, Hidden City Tours has a two-hour guided tour of the Barri Gotic

FIVE HOTELS IN EDINBURGH
Unless you booked about 10 months in advance, you’ve absolutely no chance of finding a decent room during the Edinburgh Festival, which kicked off yesterday and runs until the end of the month. These recommendations are for next year’s festival (or any other time you care to visit).

Hotel Missoni (1 George IV Bridge; hotelmissoni.com; room from £125/€179). A thoroughly modern hotel in the middle of medieval Edinburgh, brought to you by the Italian fashion house. The predominant theme is black-and-white, the furnishings impeccably contemporary and the service exemplary.

Malone’s Old Town Hostel (14 Forrest Road; maloneshostel.com; dorm £16-25). Usually, the cost of a cheap bed is dodgy hygiene or an awful location: not so with this excellent hostel, right in the middle of town, a short walk from the action. The dorms are above an Irish pub and are clean and extremely tidy.

Prestonfield House Hotel (Priestfield Road; prestonfield.com; room from £295). A step back in time and a step up in social class, this 17th-century mansion set in a huge private park is dripping in gorgeous antiques, no-limits luxury and the kind of service you’d expect from one of Britain’s finest lodgings.

Scotsman Hotel (20 North Bridge; thescotsmanhotel.com; room from £250). The former offices of the Scotsman newspaper have been converted into a luxury hotel with 56 rooms spread across a wood-panelled labyrinth of corridors and stairs (yes, there’s a lift). The rooms overlooking the northern side have splendid views of New Town and Calton Hill.

Southside Guest House (8 Newington Road; southsideguesthouse.co.uk; room from £90). Not your typical Victorian B&B, despite looking like one from the outside. Inside, though, it’s the luxury and service of a top-class boutique hotel, including eight stylishly designed bedrooms and Bucks Fizz for breakfast.

HOMELESS TOURS
City tours led by the homeless have taken off in 2015. In London, Unseen Tours (sockmobevents.org.uk) offers guided tours of various neighbourhoods including Covent Garden, Shoreditch and Brick Lane, led by either homeless, formerly homeless or vulnerably housed people. They emphasise that this is not poverty tourism, merely guided tours aimed at enhancing social awareness.

In Barcelona, Hidden City Tours (hiddencitytours.com) has a two-hour guided tour of the Barri Gotic and Raval neighbourhoods, and a 90-minute tour designed to give visitors an insight into homeless living – where they sleep, how they wash, change clothes, eat and look for work.

Pragulic (pragulic.cz) offers similar tours in Prague, as well as a tour where participants experience homeless life for a full day.

CUBAN TOBACCO ROUTE
The Cuban Tourism Ministry has announced the launch of a series of new tours celebrating the country’s cigar-making heritage.

Based largely in the tobacco-growing province of Pinar del Rio, the Tobacco Route will give visitors a look at the production cycle, beginning with farming the plants and ending with marketing and distribution. The tours will also visit factories where the cigars are made. The tours kick off in September.

It’ll also have the largest castle of any of its parks and two new experiences, Star Wars Launch Bay and Marvel Universe, have been specially created for it. The new park is slated to open in spring 2016, ahead of new developments by Universal and Dreamworks.

DINE AND FLY
Want to dine at the airport but don’t have time to queue? AirGrub has you covered, with a new app that lets you order your food in advance.

It’s ingeniously simple: enter your flight information and once you’ve picked where and what you want to eat, you pay the restaurant and the food will be ready when you get there. And, in the event of a delay, you can pass on the information or get a full refund. So far, only San Francisco and Boston airports have signed up, but expect to see it go global soon. See airgrub.com

GET AWAY AT HOME
The Gibson Hotel (thegibsonhotel.ie) in Dublin’s Docklands has a summer escape deal from €199 for two, including B&B and dinner. Sheen Falls Lodge (sheenfallslodge.ie) in Kenmare has a midweek 3 for 2 B&B package including dinner both evenings from €610 per couple. Rathmullan House (rathmullanhouse.com) in Co Donegal has a two-night B&B break until the end of August from €180 per person.