Scottish golf down to a tee

Getting tee times at the famous St Andrews golf course can be tough, but there are lots of other great Scottish courses to try 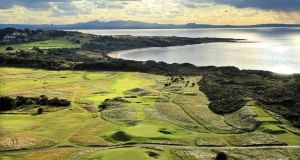 It is possible for visitors to Muirfield to play two rounds of golf on Tuesdays and ThursdaysPhotograph: by David Cannon/Getty Images 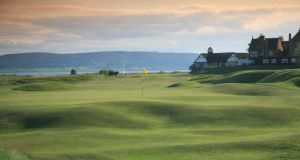 By the time 22 “noblemen and gentlemen of Fife” agreed terms for a competition at St Andrews in 1754 – the Challenge for the Silver Cup – golf was already older than football and rugby are now. In the Middle Ages, locals engaged in a game known variously as goff, gowf or gouffe (a word for “club”), whose purpose was to use sticks to knock stones into the rabbit holes on the rising ground around St Andrews.

In 1552 the local archbishop, John Hamilton, put his name to a charter that affirmed public ownership of the links and allowed for “playing at golf, futball [and] schuting” but that the breeding of rabbits, whose burrowing endeavours were so instrumental in the development of the game, were strictly Archbishop Hamilton’s responsibility.

The competition designed by the 22 gentlemen (who adopted the rather grand title of members of the Royal & Ancient Golf Club of St Andrews) was a copy of a similar challenge created in 1744 by the Gentlemen Golfers of Edinburgh (later the equally grand Honourable Company of Edinburgh Golfers) whose home was at Musselburgh just outside Edinburgh but in 1891 moved east along the Firth of Forth to a new links course at Muirfield.

The challenge was originally played over 22 holes, but in 1764 it was agreed that eight of the holes at St Andrews were too short, and so were combined into four, giving us the 18 we use today. In 1864 the course was altered again, this time by Tom Morris Sr, recently arrived as “Custodier of the Links” from Prestwick Golf Club, where he’d been “keeper of the greens” and the best golfer in the country.

He arrived as the holder of Prestwick’s Challenge Belt, a competition first played by eight professionals in 1860. “Old” Tom won four belts before passing the baton to his teenage son “Young” Tom, who reeled off four wins in a row before his 21st birthday. After his fourth win in 1873, the Challenge Belt was awarded permanently to Young Tom and replaced by the Golf Champion Trophy, better known as the Claret Jug.

The 1873 competition was held at St Andrews, the first of 28 occasions it has hosted the Open. Very little has changed on the course since then, and playing it today offers pretty much the same experience as it did back then, minus the graphite shafts and Gore-Tex waterproofs.

St Andrews’s daily ballot system, which accounts for about 50 per cent of all available tee times, is wonderfully democratic but it’s also a long-odds lottery, especially during the busy summer months. The other four Scottish courses on the Open rotation aren’t much easier.

Visitors to Muirfield (muirfield.org.uk, £200, or two rounds on same day for £260) – host 16 times since 1892 – must tee off between 8.40am and 9.50am on Tuesdays and Thursdays; they’re allowed to play a second round that afternoon, but only as an alternate shot foursome.

At Royal Troon (royaltroon.co.uk, £190 for Championship and Portland course), in South Ayrshire, you have to pay and play for both the Championship course (where the Open has been played eight times since 1923) and the less impressive Portland course. Still, it’s a small price to pay for having a go at Troon’s most famous hole, the par-3 8th, Postage Stamp.

Just 24 miles south is Turnberry’s Ailsa course (turnberryresort.co.uk, £175) – the baby of the quintet, it hosted the first of its four Opens in 1977 – strung out along the coast under the watchful gaze of the famous lighthouse. The reservation policy favours guests staying at the resort hotel: everybody else has a two-week window in which to reserve a time, which means the available slots are very small.

The easiest of the Open courses to get on is Carnoustie (carnoustiegolflinks.co.uk, championship £154, or all three courses for £180), a public complex of three courses along the Angus coastline just north of Dundee. The Championship course has hosted the Open seven times since 1931; it offers both the cheapest green fee and the most generous tee times for visitors, who can opt to play just the main course or the Burnside or Buddon links, both of which are worth the effort.

While every golfer wants to tee it up on the big five, the smartest of them also recognize that there’s plenty of stunning golf to be played on a host of lesser-known links. St Andrews has six other courses besides the Old Course: the newest of them, the Castle Course, opened in 2008, is a stunner in its own right.

Seven miles south of St Andrews is the recently revamped Kingsbarns (kingsbarns.com, £194), a links that regularly features in the world’s top 100 and is more expensive to play than any Open course.

The East Lothian coastline has an almost uninterrupted line of courses from Musselburgh, just east of Edinburgh, to Dunbar. The stretch between Aberlady and Gullane is a golfers’ alley, with seven courses crammed into four miles. The best of these include Craigielaw (craigielawgolfclub.com, £59 weekday, £90 weekends), Kilspindie (kilspindiegolfclub.co.uk, weekday £47, weekend £58) and Gullane (gullanegolfclub.com, No 1, £98, No 2, £49 weekday, £54 weekends), which has three courses to choose from: Gullane Number 1 gets most of the plaudits (the par-5 third was voted one of the best holes in the world by Golf Magazine) but many prefer the Number 2 course: the 215-yard par-3 11th is a peach of a hole, with some amazing views. It’s almost enough to act as consolation for missing out on a tee time at Muirfield, only a mile up the road.

The string of courses continues right along the Firth of Forth. The two stand-out courses are the links at North Berwick (northberwickgolfclub.com, £90), founded in 1832, and at Dunbar (dunbargolfclub.com, £70 weekday, £90 weekends), 29 miles southeast of Muirfield.

The original course, which opened in 1856, is an Old Tom Morris masterpiece; it was later altered by the other great Scottish golf architect James Braid, whose most famous creations are the championship course at Carnoustie and the King’s and Queen’s courses at Gleneagles.

Atop the ridge that leads to the 9th fairway is a view of the Barns Ness Lighthouse away in the distance, while the 12th green sits precipitously on a tiny headland separated from the fairway by a rocky beach (classed a lateral hazard).

When Braid wasn’t winning Open championships (five between 1901-10) he was designing courses – over 200 before he died in 1950. Scotland has dozens of them, and everybody has their favourites.

Besides Gleneagles and Carnoustie, some of his best-loved designs include two parkland stunners: the Boat of Garten (boatgolf.com, £45 weekday, £49 weekends), deep in the Cairngorm Mountains, 28 miles south of Inverness, and Blairgowrie in Perthshire. The original Lansdowne course (later renamed Rosemount) was designed by Sir Alistair McKenzie – who later went on to create Augusta National – and then reworked by Braid in 1930.

Everybody rightly salivates over St Andrews, but many purists will argue Old Tom Morris’s greatest contribution to golf in Scotland is 48 miles north of Inverness – and only eight degrees below the Arctic Circle. Remote or not, they’ve been playing golf on the links at Royal Dornoch (royaldornoch.com, Championship course £120), since 1616, but Old Tom extended the original nine holes in 1866 to leave us one of the most breathtaking 18 holes you’ll play anywhere on earth, all against the backdrop of the Sutherland and Ross shire hills and the Dornoch Firth. One of the first greenkeepers, a local golfer called Donald Ross, learned the basics from Old Tom before emigrating to the US, where he created his own masterpieces, including Pinehurst No 2 and Oakland Hills, both of which are regular hosts of US Opens and PGA championships.

The ambition of many an intrepid golfer is to find that “undiscovered” masterpiece, which is next-to-impossible in a country where golf is woven into the fabric of its national identity. But some of Old Tom’s most creative handiwork was done in the remotest of locations. In 1891 he travelled by ferry to South Uist in the Outer Hebrides to design Askernish (askernishgolfclub.com, £35), an 18-hole links that was largely forgotten until a decade ago. But Morris’ genius is best experienced on the links at Machrihanish (machgolf.com, £65), near the Mull of Kintyre at the southern end of the eponymous peninsula. Its relative inaccessibility – it’s five miles from the nearest town – makes Machrihanish largely unknown, but this was Old Tom at the peak of his powers: the opening tee shot is played over the North Sea onto the first fairway, making it a contender for most dramatic opening hole in Scotland. According to the locals, the only reason Old Tom placed the tee where he did was so that golfers would have easy access to a pub for a “bump of the bog water” before playing. Golf and whisky. This is Scotland, after all.