No squeaks or leaks: testing out a new cruise liner

With a butler at her disposal, Joan Scales is one of the first guests to try out a new cruise ship 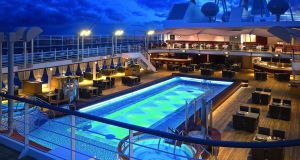 The pool deck on Silver Muse.

What do you do with a butler? For many people their first time on a Silversea cruise may be the first time to interact with a butler. Butlers come as standard when you book a suite on one of its cruise ships.

My butler’s name was Mark, a smartly dressed man from the Philippines. As I had already unpacked, I took away his first job. He showed me around my stateroom, where to find everything and how to summon him. He polished my shoes while I was at dinner and brought a nightcap.

I was visiting for two days while the newest Silversea ship, the Silver Muse, went through its paces on the shakedown cruise before the ship comes into full service. The shakedown helps the crew familiarise themselves with the features and peculiarities of a new ship and turn up any snags.

We sailed from the French port of Marseille to Tarragona in Spain, and then on to Barcelona. The sea was calm and everything shipshape. I didn’t discover any squeaks or leaks, though I tried.

As a small ship, the Muse is intimate compared with the 5,000-passenger leviathans being produced now. With a maximum of 596 passengers, you find yourself recognising people in no time. The staff to guest ratio is almost one to one, so plenty of attention.

Since Silversea was founded in the early 1990s it has been recognised as the gold standard in cruising. It led the concept of all-inclusive pricing with gratuities and excursions included in the price. Most ships now include gratuities.

Shore excursions include a trip in Tarragona to the theme park Ferrariland, opened at Port Aventura. Motor racing fans would love this tribute to Enzo Ferrari, modelled on an Italian town with huge rollercoasters, rides, bounceback and a racetrack with mini Ferraris.

Red Force, the highest, fastest vertical accelerator rollercoaster in Europe, will hurtle you up to 112 metres, from 0-180km in five seconds over the 800-metre track. The screams from the coaster are unbelievable – enough to put me off trying it myself and instead I take in the showcase of Ferrari cars from different years, and a pricey gift shop.

The Silver Muse will be calling on 130 ports and 34 countries following its launch. The Grand Voyage for 2017 will be a circumnavigation of South America in the winter. The journey will take 66 days and call on 38 ports and 19 countries. Entry-level prices will be from €33,000pps, though you can take a shorter cruise around the Mediterranean from €5,000pps.

Like many places we go in the world, there is always an Irish voice to be heard. On my short voyage on Silver Muse, the voice belongs to Kevin Fagan, of Lucan, Co Dublin, one of the entertainers for the singing and dancing show, Blues Brother Soul Sister, a lively classic collection of blues and soul numbers.

The ship has eight restaurants where you can dine around the world – both in a casual setting or fine dining. The choices included French, Asian Fusion, Italian, Grill, and the casual pool restaurant. My favourite little haunt became the Arts Cafe where you could sit watching the sea go by with great coffee and cake and admire the art works.

If you are dedicated to keeping fit, eight laps of the top deck is a mile or there is a fully fitted gym with personal trainers. Or you can pamper yourself in the Zagara Spa where there is a selection of wellness treatments.

The ship cost $300 million (€275 million) to build and you can feel the luxury in the acres of peaceful taupe carpets as you admire the variety of art and sculptures.

One job I discovered I could ask Mark the butler to do was arrange a cocktail party in my suite for newly made friends, and it would cost nothing, as everything is all inclusive. So next time, he will be busy.

The Silver Muse is the ninth ship for the company, four of which are exploration ships, going deep into interesting places such as Antarctica, the Amazon and Alaska.

Four of the ships will be calling in to Irish ports this season – Dublin, Waterford, Cork and Galway. Silver Muse will call into Cobh on September 15th for a visit. See the schedule at iti.ms/2ppjfHz

Cruising continues to be the fastest growing holiday and ships launched this year include the luxury Seabourn Encore carrying 600 passengers and Viking Sky with 930 passengers.

The largest ship launching in June will be Italian-owned MSC Meriviglia with capacity for 5,700 passengers overtaking Royal Caribbean’s Quantum class ships. The current largest, Meriviglia, is already planning on visiting Dublin next year.