While known for its gambling, Las Vegas is constantly upping its game by offering bigger and better hotels and food as well as spectacular, and cultural, shows 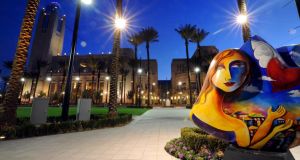 The Smith Center for the Performing Arts 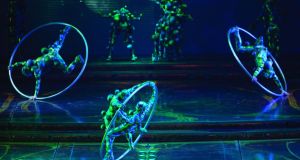 There are 5,000 rooms in the MGM Grand Hotel in Las Vegas – one of the biggest in the world – and as we booked in on a recent Monday night there wasn’t a single one to spare. Despite the recession, Las Vegas is still breaking records: 2012 saw 39.7 million visitors come to try their luck and walk the famous strip. Vegas, in all its glam and glory, is hotter than ever.

And it’s changing too. The strip is sparkling, with the new New York, New York centre thrusting its “Manhattan” skyline proudly to the sky, its very own statue of liberty daring you to leave to see the real thing.

For Irish travellers a New York/Las Vegas pairing is probably the ultimate combo, with both cities vying for top billing on most of our lists. And now, flying out of Ireland makes this dream trip more accessible than ever.

I’ve been lucky to fly to the US a lot in recent years and only one thing has marred the journey – the often two-hour long queue, Stateside, to get through immigration just to make a connection. Tight airport security makes us all safer but we’re often left high and dry when it comes to speedy transfers. Until now.

Flying with Aer Lingus on its JetBlue partnership out of Dublin’s terminal two, I wandered through a deserted US immigration in minutes. I didn’t realise it until much later but in those few minutes in Dublin I had cleared every hurdle the US was going to throw at me. No more checks, no more removing my shoes and belt, no more queuing and, since I was transiting through JFK’s terminal five, I got to make use of all the extra benefits that JetBlue’s terminal has to offer: fast transfers – 60 minutes is plenty of time – and the terminal itself is really well served. It’s a domestic terminal connecting with destinations all over the US so landing an international flight there, with immigration completed in Dublin, is a fantastic benefit. It actually felt easier than taking a flight within the EU.

While Las Vegas is known for its gambling, there’s so much more to see and do.

Americans love celebrity and they also love food so it’s no surprise that the celebrity chef holds a very special place here.

The choice of great restaurants is quite amazing and the locations are true Las Vegas – each better and bigger and more beautifully designed than the last. But when it comes to food, flavour and presentation is everything, such as with the sushi at Mozen Bistro at the Mandarin Oriental. The menu is designed as a trip through Asia five-star style. Or there is the fantastic lunch at Table 10 at the Venetian, a modern take on New Orleans cuisine in a terrific relaxed setting. The décor is infused with atmosphere and gates of houses found after Hurricane Katrina hang on the wall above us.

So much of Las Vegas was not what I had expected. The standards were incredibly high, the hospitality real and everything presented at its best.

There were simply no corners cut and even the replica Eiffel Tower and Venetian landscape on the famous strip made you want to stop and stare.

But then spectacle is what the city does best, a fact appreciated by the Cirque du Soleil which runs eight full-scale shows in the city every night. The latest is a Michael Jackson-themed show called One that is due to open at the Mandalay Bay Resort at the end of this month.

Cirque has custom-built theatres, with a set and auditorium to match any in the world, which allows it to deliver the shock and awe it is famous for.

There are no bad seats in the Zarkana theatre in the Aria Resort when we settle in for our show. The acrobatics on stage, the level of professionalism from the cast and the sheer spectacle of it all is staggering. And we finish the evening with a great meal in the Jean Georges Steakhouse, just a short stroll away in the same complex.

The casinos are still full but there is a sense that another layer has been added to the city – a reason to come that is bigger than the casinos. But it’s not all new: the wedding chapels are still thriving. More than 100,000 weddings are held here every year and Elvis is still doing a roaring trade.

You can see why. Brendan Paul Duffy, the owner of the Graceland Wedding Chapel, whose grandparents came from Cork and Shannonbridge, sings us through one of his ceremonies in full Elvis regalia. You can tell he loves what he’s doing and people queue to make their vows in his tiny wooden church, where Jon Bon Jovi once got hitched.

Packages range from $199-$799 and, since it is the home of the first Elvis package, the king is at the heart of each event.

Not far away is Viva Las Vegas weddings. Although digging the same rich Elvis seam it’s a very different experience, with pink Cadillacs and multiple options. You can marry in a traditional chapel, or a 1950s-style diner and even have the ceremony conducted by a vampire. And although gay marriage has not yet made it to the state of Nevada, it is one of the few chapels that offers a commitment ceremony for gay couples. Elvis and wedding chapels are a part of the older traditional image of Las Vegas and old doesn’t always sell well in a place that is constantly reinventing itself. There’s so much modern history built up in this city that it seems a shame not to see it. A popular museum to the mafia has opened on the strip but, further out of the centre, is the Neon Museum.

The neon lights of the Las Vegas strip are famous but as hotels were knocked down and rebuilt these lights were dumped in various places and one of these dumping grounds has become a museum where eager volunteers are restoring the lights.

A guided tour around the bone yard that they now call home uncovers a glittering history of the stars and ambition that built them before they fell from grace and were replaced. It’s a great trip down memory lane for the city and a sign that there’s always more to see if you scratch the shiny new surface.

The Smith Center is another addition to the cultural heart of Las Vegas. A world-class performing arts centre built to rival the great opera houses of the world, its designers visited venues such as La Scala in Milan and Le Palais Garnier in Paris to come up with a blueprint. It certainly has stature.

From the auditorium to the bar to the private members’ rooms, every detail has been designed to impress and match the glitzier side of the city, but in a high-culture setting.

In many ways the Smith Center is the antidote to the glitz and glamour of Las Vegas, or indeed a perfectly positioned partner, offering just another reason to visit this constantly changing city.


The Las Vegas Convention and Visitors Authority covers southern Nevada. For more information go to lasvegas.com or call the Dublin office on 01 -6319640.

Gary Quinn travelled as a guest of Aer Lingus. (aerlingus.com)