Don’t fence me in: On the cowboy trail in southern Arizona

Some towns appear like a resort, but much of the region still feels dusty and untouched 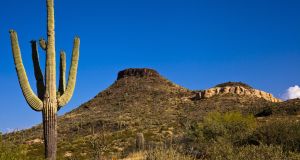 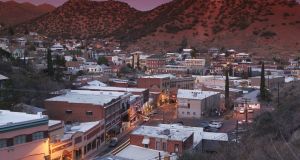 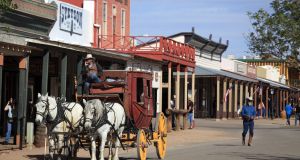 Like so many young boys raised on a diet of westerns, I harboured casual dreams of being a cowboy. Of being under starry skies and riding through the wide-open country, gazing at the moon until I lost my senses. Much of America’s southwest lays claim to being cowboy country, but the real deal is harder to find.

Southern Arizona’s dusty desert vastness is the true heartland of the old West. This is the home of Cochise, Geronimo and the Chiricahua Apaches; of Wyatt Earp, Tombstone and the Gunfight at the OK Corral. Flying into Phoenix Airport, I’m excited at the prospect of a landscape dotted in saguaro cacti, whose arms don’t even begin to grow until they’re 100. I resist the urge to buy a Stetson – only to give in to it a few days later.

To get to cowboy country, I drive 120 miles south to just east of Tucson and the Tanque Verde dude ranch, where I can ride horses, sing cowboy songs, develop my lariat skills and eat barbecue under star-studded, black-velvet skies. I’m not much of a horseman – it seems I lack good seat – but I did manage to stay saddled while my horse meandered down a steep rocky path into a valley and up the other side, where a breakfast of eggs and coffee awaited. Later, I played tennis and cooled off in the swimming pool. Not quite roughing it on the wide-open range, but ranch resorts like this one wouldn’t stay open long if they didn’t provide a few modern amenities.

Less than an hour’s drive south of Tanque Verde is Tombstone, probably America’s most famous cowboy town. A National Historic Landmark since 1963, the town looks the real deal, as do the grave markings in Boot Hill cemetery a quarter-mile north of town: Murdered. Killed by Indians. Shot. This is where Billy Clanton and the McLaury brothers are buried, killed by Wyatt Earp, his brothers and their friend Doc Holliday at the Ok Corral in 1881. Less authentic are the daily re-enactments of the fight, performed by actors who tip their Stetsons and say “howdy” before stepping in for the ubiquitous selfie. Tombstone looks like the Wild West but operates like a theme park.

Not so Bisbee, an old mining town 12 miles away. Wedged in between the steep walls of Tombstone Canyon, the town coalesced around the millions of tonnes of copper that were extracted from the surrounding mountains between 1880 and 1975. A tour of the mine, where you’re taken 1500 feet deep into the mountain aboard a miner’s train, is a salutary reminder that this was a grim business indeed.

Unlike virtually everywhere else in America, though, Bisbee has resisted the forces of globalisation. There are no chain coffee shops, no familiar fast food joints or any recognisable brand name anywhere. When the mines closed, Bisbee attracted hippies, artists and other counterculture types looking to live at the margins of society; they joined forces with recently unemployed miners to create one of the most eccentric towns in the country. More than a century after the passing of the Wild West, Bisbee has the anarchic feel of a frontier town, only with half-decent wifi.

From Bisbee I head west into the Sonoran Desert, which stretches across southern Arizona as far as California and south into Mexico. Driving along Hwy 86 I cut through the Tohono O’odham Nation, the second-largest Native American reservation in the United States. This is the lonely highway of my cowboy dreams, with huge cloudless skies and barely a sign of human life, save the occasional appearance of the green-and-white SUVs of the Border Patrol, a telling reminder of southern Arizona’s key role in one of Donald Trump’s most controversial plans.

Most Arizonans are staunchly republican (pro-guns, anti-big government), so it is no surprise that Donald Trump won the state in the election. His margin of victory, however, was slimmer than many anticipated and he failed to carry the bulk of the border counties. There’s a deep antipathy in these parts for his wall, considered an attempt to restrict the flow of trade and personnel that keeps the local economy afloat and defines so much of the cultural landscape.

This is especially true in Yuma, a majority Hispanic town in Arizona’s southwestern corner on the borders with Mexico and California. Once a popular location for Hollywood movie crews shooting westerns and desert movies, Yuma’s main employers today are the massive lettuce farms in the surrounding area – more than 90 per cent of all the lettuce sold in the United States is grown here – and the military, which has two bases in the desert east of town.

In the centre of town, the Old West casts a long shadow in the shape of the Arizona Territorial Prison, high on a bluff overlooking the Colorado River. Between 1876 and 1909 more than 3,000 sorry souls were imprisoned here in conditions befitting its nickname of “hellhole of the west”.

A few of its inmates most likely came from the mining town of Castle Dome, at the end of a gravel track about an hour’s drive northeast of town. Here I hit cowboy pay dirt: in its late 19th-century heyday this was a booming “city” of more than 3,000, and it saw its fair share of miscreants and murders. This is one of the most compelling ghost towns in the whole of the United States: I walk past the old mercantile, still packed with dusty stock; the saloon, with bottles turned a shade of purple from the sun; and the sheriff’s office, complete with its original cells. It’s much less polished (and visited) than Tombstone, but all the better for it.

If the town has survived at all it is because of the efforts of ex-cattle rancher Allen Armstrong, who bought the land and everything on it for $200,000 in 1994 and has spent the past two decades restoring it to its Wild West prime. “You can’t see the American dream in most places,” he tells me as we walk around, “but this is my version of it right here”.

Southern Arizona has that effect on a lot of people. The climate helps – 330-odd days of sunshine a year – as do the wide-open spaces, that encourage a kind of life not possible in other, more restrictive parts of the world.

“The only people who live here are those who want to be here,” a local woman tells me in the car park of Taliesen West, the stunning house in Scottsdale that Frank Lloyd Wright built for himself in 1937. By the time he died in 1959, Scottsdale had been transformed from dusty ranching community to the Beverly Hills of the Desert, a luxury retreat favoured by Hollywood types, some of whom even had second families secreted away in elegant mid-century modernist villas, whose design was inspired by America’s most famous architect.

Scottsdale remains a glamorous getaway: there are golf courses aplenty (including the famous TPC stadium course that hosts the Phoenix Open on the PGA Tour), superb dining (I was told the reason there are so many high-quality Italian restaurants is that the city was the preferred destination for Mafiosi who had gone into the witness protection programme) and a handful of world-class hotels, including a Four Seasons built into the desert and the Hotel Valley Ho, which opened its doors in 1956 and remains one of the best-preserved mid-century hotels in the United States.

Yet even in this pristine setting a touch of anarchy prevails. Cosanti is the gallery and studio of Paolo Soleri, an Italian designer who came to Scottsdale in 1948 at Wright’s urging but fell out with the prickly architect before developing his own theory of “arcology”, a theoretical mash-up of architecture and ecology that plays well in today’s eco-sensitive times.

Cosanti is marvellous. This eye-catching collection of semi-buried, poured concrete buildings linked by courtyards and garden paths is testament to a creative imagination given full expression by a dreamer who refused to play by anyone else’s rules. My tour, courtesy of Soleri disciple Roger Tomalty, finishes with a close-up view of the production process of Soleri’s most famous creations: the hand-made, sand-cast clay and bronze bells that was his primary income until his death in 2013.

“He was quite something,” I remark in appreciation of the art and its wonderful surroundings. “Oh he was, alright,” laughs Tomalty. “The ultimate cowboy. What was it Cole Porter wrote? Don’t Fence Me In? Well that was Paolo. You just couldn’t fence him in.”

Southern Arizona in a nutshell.

Getting There: Aer Lingus operates daily to Washington, DC, from which United Airlines connects to Phoenix, from €700 return (aerlingus.com)