Kreuzberg and its neighbour, Neukölln, have kept their bohemian style without losing their edge 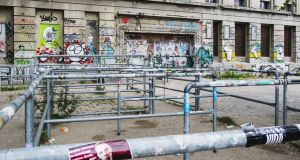 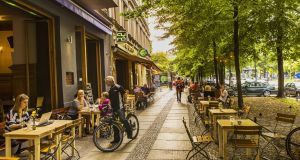 For the first-time visitor to Berlin, one of the most striking aspects of the city is how hugely underpopulated and joyfully decrepit the place is. In the early 2000s, Berlin’s then mayor Klaus Wowereit said, “Berlin is arm, aber sexy” (Berlin is poor but sexy) and it’s a mantra that still resonates, even in the capital of Europe’s economic engine.

Unlike other capital cities that price out young people, Berlin offers an opportunity to pay cheap rent and live a creative or freelance lifestyle. And it’s in neighbourhoods such as Kreuzberg and Neukölln where this is played out. It’s well worth exploring Kreuzberg further, beyond the snarky guidebook cliches, or the unconsidered comparisons with Williamsburg in Brooklyn, New York. Whereas Williamsburg transformed hipsterdom into a capitalist brand, leading to try-hard interlopers and overpriced condos, Kreuzberg maintains both an edge and an underground.

Berlin is somewhat centre-less, instead made up of a collection of neighbourhoods. South of Mitte, the historical core of Berlin, is Kreuzberg, and across the river Spree, it turns into Friedrichshain.

South of Kreuzberg is Schöneberg, a neighbourhood that has gone through various stages of glamour, from the mansions of the 19th century, to the cabaret and burlesque nightlife of the 1920s, largely viewed as the first gay village in the world throughout the 1920s and 1930s, and home to Iggy Pop and David Bowie in the 1970s. Bordering Kreuzberg and Schöneberg is Neukölln. There’s an almost clandestine feel to the place, and the sense of a genuine underground.

After the war, cheap housing in Kreuzberg saw an influx of immigrants. In the 1960s, with the erection of the Berlin Wall, it became something of a West Berlin island, cloistered by the wall on three sides, and the perfect environment for artists, students and squatters.

These days, its coolness attracts those who could ultimately destroy it; the young Americans done with Brooklyn and Londoners escaping high rents. But its internationalism is also an attraction, and it’s become home to countless artists, musicians, DJs, writers and hangers-out, all enjoying the chilled Berlin dream. Kreuzberg’s residents resist gentrification and welcome refugees; Berlin effectively banned Airbnb and other short-term holiday rental sites this year from operating in the city, although you can still find some rooms on the site. Recently, a court ruled that people with second homes in Berlin could offer them as short-term rentals.

Once you’ve got used to the dim street lighting, the fact that many bars are tough to find and aren’t big on signage, and the almost jarringly block-y neighbourhood landscape that welcomes graffiti on every surface, start your day with coffee.

Five Elephant on Reichenberger Str is one of the more celebrated X-Berg coffee joints, and they do a good cup in nice airy surroundings, along with excellent cheesecake. But a lesser-known spot is the tiny Concierge cafe on Paul-Lincke-Ufer, a street that runs by the Landwehr canal. Coffee is made with serious care in a room where a one-person queue makes it seem crowded.

This is a big brunching neighbourhood, although many weekend buffets are hit and miss. A less colossal feed can be found at Nest on the edge of Görlitzer Park, or 3 Schwestern, a restaurant on Mariannenplatz set in an old convent now converted into an arts space. For something cheap and quick, head to Burgermeister under the U-Bahn bridge at Oberbaumstrasse where the excellence of their burgers and cheese fries is measured by the length of the queue.

At the weekend, it can feel as though there are are markets at every corner, but if you’re looking for something flash to wear clubbing, VooStore on Oranienstrasse is loaded with very covetable clobber.

Some of the best local bars seem to put in minimal effort yet still get it right; nameless small rooms with bare walls, recycled furniture and good music, the type of aesthetic that is now replicated the world over. It’s worth wandering and dropping into wherever you come across that looks interesting. Kreuzberg is a dress-down place, and fun spots are ramshackle and random, like the queer bar Barbie Deinhoff’s on Schlesische Str, populated by drag queens and pre-drinkers, or the lesser-known Filmkunstbar Fitzcarraldo, with a video store in the basement. A real gem is Schwarze Traube on Wrangelstrasse, where your flavour and spirit preference is listened to, and a drink is magicked up without a menu.

In a city full of brilliant nightclubs, for many there is really just one: Berghain. Undoubtedly the best techno club in the world, it typifies Berlin’s libertarianism, hedonism, industrial architecture and love of quality electronic music. Regulars are rightly protective of this institution, and while its infamously strict door policy is much talked about, it exists to keep Berghain enjoyable for all who respect it. Large groups, in-queue drunkenness and rudeness are not tolerated on the door. Photography is banned, and time has a habit of running away on you once you’re inside.

There’s a reason that Berlin and Kreuzberg have become shorthand for a sense of personal freedom. The city and neighbourhood facilitate creativity, partying and people who want to check out of high rents and high pressure, and make somewhere equal parts chilled-out and edgy home. Tapping into its scene opens up the possibilities of what a creative neighbourhood can be.