More than 1,200 members of the public have now written about their favourite places to experience nature in Ireland, for an ‘Irish Times’ competition. Here they share some of their secrets

Bantry Bay and the Caha Mountains from Mullaghmesha

So far more than 1,200 people have entered the Irish Times Best Place to Go Wild in Ireland competition: our hunt for the best places on the island to experience nature. Every county is now represented, with 12 days to go before the closing date.

Monaghan leads the inland counties, with 48 submissions so far, followed by Cavan, at 44. Waterford and Wexford are the most active eastern counties, with 18 entries each.

Read about the full range of wild places and experiences, from lake swimming to night kayaking to birdwatching, at irishtimes.com/gowild. The site has all the details of the competition, and you can write your own submission there, too.

Here are some of the entries so far.


West Cork hidden treasures
For me, going wild in Ireland is stepping out of the car and feeling the first taste of a salty Atlantic wind in your face while looking at the magnificence that is Bantry Bay, in west Co Cork.

Taking the bikes on the little ferry from Bantry and cycling on rarely used roads on the sleepy Whiddy Island (and have a delicious chowder afterwards at the island’s only pub).

Collecting cockles and mussels at Eagle Point in Ballylickey and eating them straight from the shell off the barbecue.

Getting up early to spot the otter at Snave, and feeding the swans under the falls at the River Ouvane in welly boots and raincoats.

Eating picnics with our backs to ancient standing stones at Maugha, Lough Atooreen and wandering down across the hill to Carriganass Castle and the village of Kealkill.

Swimming in secret “blue lagoons” under waterfalls in the Borlin Valley.

Wandering Garnish Island, vying to see who is the first to spot one of the sea eagles and, when we get fed up of that, testing the echo acoustics in the lower part of the Martello tower.

Running with children through spongy grass, to the “rainbow’s end” at the lighthouse on the Sheep’s Head Peninsula while checking for a breaching humpback whale.

Swimming in phosphorescence in August in a sea cave near Eyeries, and meandering back over the Healy Pass as the sun sets over the Sugarloaf.

And most of all, on calm misty warm summer days, kayaking out on the bay and, sometimes, up the estuaries of the Coomhola and Ouvane rivers . . . and, if one is inclined, mooring up for a pint at the pub on the Ouvane on the way back.

All and much more in a small hinterland in the heart of west Cork.
Siobhán Sullivan

100m-high shark’s-fin sea stack. It sits in one of the most remote and inaccessible locations in Ireland.

We descend 250m sea cliffs to arrive on beautiful storm beaches in one of the most remote and atmospheric locations in Ireland. We then launch from the shore and cross open ocean to land at the bases of towering monsters of immaculate rock. We climb these towers and arrive on pristine pinpoint summits far from anywhere in the real world.

Drifting down the Barrow, Co Carlow
The River Barrow has stunning waterside and mountain walks, canoeing for all levels, and off-road cycling. Abundant wildlife greets you – herons, otters and kingfishers flashing by and salmon jumping the weirs.

You can walk the towpath all the way from Carlow town to south Co Carlow, in the wilderness yet always close to villages that once were thriving centres of trade.

Hire bikes in Graiguenamanagh and cycle the eight kilometres, past locks and forests, to St Mullin’s. Go With the Flow River Adventures will bring you down by canoe. The Blackstairs Mountains form the border with Carlow and Wexford, and the more experienced can walk its spine from the White Mountain towards Mount Leinster.

The site oldgrainstorecottages.ie gives you walks to the top of Brandon or easy strolls along the river.

No need for the Dublin folk to drive for miles to find the Best Place to Go Wild in Ireland. We are just down the road: exit six off the M9.
Martin O’Brien


The Irish Times wants to discover the best spots in the 32 counties to experience nature, and is inviting readers to nominate their favourites. Write us a passionate pitch at irishtimes.com/gowild

Do you ever feel like a weed – a plant growing where it is not valued? 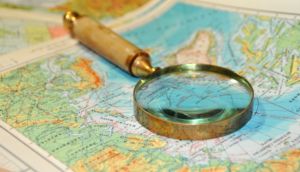 How is your county doing? Hundreds of you have already nominated - check your county