Entries are pouring in for the ‘Irish Times’ competition to find the best day out anywhere on the island. Here readers recommend bike rides around the country 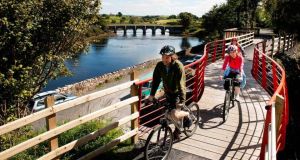 The Irish Times is running a competition to find Ireland’s Best Day Out, and has asked members of the public to pitch a visitor attraction or leisure experience.

A memorable day out can take many forms: an adrenaline-pumping outdoor activity, a visit to a museum that brings its subject to life, a relaxing day at a pampering centre, a ramble through a little-known corner of Ireland – or a combination of the lot.

Nominate your best day out at irishtimes.com/bestdayout before May 16th.

On our first trip to Co Mayo we hired bikes and cycled part of the Great Western Greenway, a 38km round trip from Mulrany village to Achill town. My six-year-old – “a big boy now” – wanted his own bike; it was a long cycle for young kids but so much fun. We stopped for drinks and snacks along the way and enjoyed beautiful scenery. We had our packed lunch in a picnic area in Achill town, followed by a 99 from SuperValu.

The return trip was easier, as the wind was at our backs. Our six- and eight-year-olds passed us out on their bikes, but on the journey back something happened. The winds picked up suddenly. In the distance we spotted something like dust, and thought it was a car, but there was no car. The dust came closer, swirling in circles towards us. We had come to a stop when, all of a sudden, it knocked my eight-year-old off her bike, before swirling on down the path.

I heard afterwards that the west of Ireland does get mini tornadoes from time to time. My daughter – not hurt but thrilled – will never forget it. I would recommend this cycle to any family, but mind the mini tornadoes. greenway.ie.
Joan Dinneen

My very own Carlow Way

First take your bike to Borris and enter the grounds of historic Borris House. The stunning Mountain River tumbles over its rocky path through ancient woodlands.

Next, the grassy Barrow towpath meanders through the finest river scenery in the country – and is a feast for the senses.

Before long Graiguenamanagh comes into view, and a visit to Duiske Abbey is a detour well worth making. The pretty town has plenty of accommodation and hostelries to break the journey.

My favourite stretch of the river is from Graigue to historic Saint Mullin’s, a special place that exudes tranquility and spirituality. The ruins of the monastery, round tower and high cross are distinct reminders of early Christian Ireland, and the small museum is full of interesting local history of Moling. Finish it off in the lovely Muilleacháin Cafe, on the river bank.

The next section takes me into the Blackstairs Mountains – a great cardio workout, but the stunning views make up for the hard work, with the Wexford coastline clearly visible on a fine day. My mountain cycling peaks at the Coolish Gap, and I descend by way of an old green road.

The greenway takes me down past a grove of Scots pine, and I emerge on to minor roads that take me towards Ballymurphy and the famous rock art at Rathgeran. This is rural Ireland at its best.

I head to the neighbouring village of Rathanna and the recently opened Osbornes Hostel to rest up for my next day’s challenge. riverbarrow.net.
Turlough O Brien

Join Leitrim Landscapes Guided Walks for a one-hour guided foraging nature walk, then let Adrienne and Graham from Adventure Gently help you explore the Shannon Blueway by Canadian canoe. To complete your day out in Leitrim, cycle the easy way on an hour-long guided electric-bike cycle with Séamus from Electric Bike Trails.

This trip will take you along the Shannon Blueway and on peaceful country lanes with no sound but birdsong, where nature awakens your senses to all the sights and sounds of the countryside. Finish your day with a hearty meal, a few creamy pints and some lively traditional music in Beirnes of Battelbridge. bigdayoutinleitrim.com.
Eileen Gibbons

Art in the Offaly bog

I fell in love with the stunning Lough Boora Parklands in 2013, when I spent a sun- and fun-filled weekend on an Art Hedge School with the artists Tom Meskell and the late Jean Conroy, foraging for natural materials to create crafted temporary pieces. Since then I have returned many times, exploring the park and its nature and art both on foot and by bicycle.

Abundant with nature, Lough Boora is fun for all the family and for all ages throughout the year. It has also recently opened a visitor centre and cafe. Bicycles are available for hire. Lough Boora is a hidden gem in the midlands awaiting discovery. You just have to go there to see what you have been missing. loughboora.com.
Majella O’Dea

Kick off with a full Irish breakfast at the Dolphin Hotel, on Inishbofin, saunter down the boreen towards a sign advertising bike hire at a farm gate and, in the back yard, rent a few shiny bikes. Pedal downhill, past the ruins of St Colman’s Abbey nestling among fuchsia, fern and montbretia, towards a curved beach that stretches before you like a golden carpet.

More downhill pedalling will bring you to a little gateway leading to the Green Coast Award-winning Duach Beach – a calm bay frilled with the tiniest seashells – the perfect location for your first pit stop.

Gentle uphill cycling brings you past Lough Bofin on your left and towards Glas Oileán, where you can scramble down steep grassy banks towards sea caves known as the Blow Holes and watch nature at its most awe-inspiring. Hopping on the bikes again, head towards the most westerly point of the island and the spectacular Stags of Bofin.

Back on the saddles, cycle beneath the highest cliffs on the island, on which perch the ruins of a promontory fort and Granuaile’s “O’Máille’s Castle”. Meander along “green road” and take a detour down to another immaculate beach – an Trá Gheal – where waves thrash the shoreline.

The next important landmark is Doonmore Hotel. Lounging outside its geranium-laden porch in the midday heat, rest your bones and devour fresh local produce from its extensive menu. Then follow the boreen down towards the sleepy harbour with its impressive ruins of Cromwell’s 16th-century barracks at its entrance and its colourful boats bobbing in the sunshine.

Search out the little treasure trove of this harbour: an island heritage museum run by Marie Coyne. The rothars beckon again, so make your way upwards through hushed bog roads towards East End Bay and its cluster of whitewashed cottages. The turquoise sea here is a snorkeller’s paradise. Enjoy a well-earned dip and snooze the afternoon away on its tranquil shore. inishbofin.com.
Bernadette Melia