He’s on the go for most of the year, but sightseeing isn’t on the agenda for the golfer, whose dream holiday would be a Mediterranean road trip 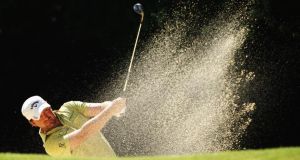 Graeme McDowell in action on the golf course

For a guy who spends half the year on the road, Graeme McDowell is not a huge fan of travel. His ultimate ambition is to avoid airplane travel altogether, or at least to be able to leave his golf clubs at home and travel with carry-on luggage only. “That would be a fun experience for me,” he tells me, “but I don’t get a chance to do that very often.”

Mind you, he’s not complaining. The 18th-ranked golfer in the world knows he lives a gilded life and that travelling first class (“the sharp end of the plane”) doesn’t constitute a hardship, but he’s quick to disavow me of the notion that his is a life peppered with downtime to go wherever and do whatever he wants.

“I have my 2015 schedule in front of me, and I pretty much know where I’m going to be and what I’m going to be doing every day this year.” Tournament golf will take up half the year; the rest of it will largely be spent fulfilling all of those other commitments that make his privileged life possible, mostly related to sponsorship deals, business interests and media obligations.

And then there’s his family. He married Florida native Kristin Stape in 2013 and in August of last year she gave birth to their baby girl, Vale. McDowell is keen to spend whatever free time he has with his new family at his home in Lake Nona, an exclusive, 600-acre residential community in south Orlando that is also home to other top pros, including Justin Rose, Ian Poulter and Henrik Stenson. It’s not difficult to understand the appeal of Lake Nona: the houses are swanky, the weather is almost always perfect, there’s a private golf course on the estate and it’s only a 10-minute drive from the airport, which makes travelling easier.

Surprisingly, the bulk of McDowell’s travel is on regular scheduled commercial airlines. Travelling by private jet is not financially viable for anybody, except “the top three or four guys who fly [private] week in, week out.”

Occasionally, though, McDowell gets to shed the privations of ordinary first class travel and slum it in the style of Rory McIlroy or Tiger Woods when he and some of his Lake Nona neighbours pool together and fly private to domestic tournaments they’re all scheduled to play in. For McDowell, owning or leasing his own plane is simply a question of balancing convenience against cost, but always with a view towards cutting down on travel time: “having your own G5 parked out on the runway ready to go would save you two weeks of travel a year, and some guys think that it’s worth that. I’d need to win a few more majors before the private jet becomes a realistic possibility.”

Besides the amount of time he spends in the air, McDowell’s other travel bugbear is excess luggage. A fully loaded golf bag – clubs, spares, shoes, wet gear, balls and all of the other accoutrements of the touring pro – can weigh up to 40kg, and that’s before he has checked in his ordinary luggage. “It’s constantly a case of having to get the chequebook out,” he laughs, invariably conscious of the fact that there isn’t a lot of sympathy out there for the millionaire sports star who has to fork out a few extra quid before being handed a glass of bubbly and a pair of slippers.

The top golfers may travel the world in pursuit of trophies and winner’s cheques, but most of them don’t see much of it beyond the resort where they’ll play and most likely stay. Tight schedules make it almost impossible to do otherwise. They arrive in time to practice and leave as soon as the tournament is over – there’s just no time for sightseeing. It’s hardly surprising then that most golfers like to spend their off-weeks at home.

McDowell is no different, but there are places he wants to visit. Top of the list is Italy, a country he’s never been to but is keen to explore with Kristin, who’s half-Italian. Their dream holiday would begin in the south of France, and they’d make their way across the Italian border and “just spend some time there, up and down the coast, hitting the vineyards and really just exploring the Mediterranean.”

He also gets home from time to time, to visit friends and family in Portrush (he’s looking forward to bringing Vale home for the first time this summer) and to attend to his preferred charity, the Children’s Medical Research Foundation, which is the principal fundraiser for Our Lady’s Children’s Hospital in Crumlin. McDowell, who kicked off his involvement with a $200,000 donation in 2012, is especially attached to the cardiac unit, the only such ward in Ireland to have a 32-county remit.

McDowell may like visiting home, but he has no plans to return on a permanent basis and is considering taking out US citizenship. He likes the idea of living in California (“the coastline just south of San Francisco, along the Monterey Peninsula and up into Napa Valley, to me that’s Ireland-meets-Florida”) but Orlando will remain his family’s home for the foreseeable future.

For more information or to donate to the Children’s Medical Research Foundation, see cmrf.org.