This summer tens of thousands of fans from both parts of Ireland will journey to France for a joyous festival of football. Many will be oblivious to the fact that the last time there was such a gathering of Irish in France was exactly 100 years ago 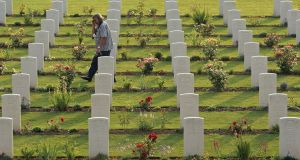 In June 1916, two divisions, the 16th (Irish) Division and the 36th (Ulster) had taken their place along the Western Front in France for a major summer offence. 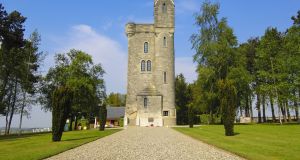 The Battle of the Somme is best known for its first day, July 1st, 1916, the worst day in British military history when almost 20,000 British and Commonwealth soldiers were killed.

Football fans are often referred to as travelling armies. This summer tens of thousands of fans from both parts of Ireland will journey to France for a joyous festival of football. Many will be oblivious to the fact that the last time there was such a gathering of Irish in France was exactly 100 years ago.

In June 1916, two divisions, the 16th (Irish) Division and the 36th (Ulster) had taken their place along the Western Front in France for a major summer offensive. These two divisions, comprised of 25,000 Irishmen, were all volunteers, the former nationalists, the latter unionists, but both united in a common cause - the defeat of imperial Germany.

There could not be a greater distinction between these men who were in France to kill and be killed and those who are travelling this summer to express their nationalism in altogether more benign ways.

The Republic of Ireland’s games against Sweden in Paris on June 13th and Italy in Lille on June 22nd will afford Irish fans a chance to go and see the melancholy landscapes where so many of their compatriots fought and died 100 years ago.

The European Championships coincide and overlap for the latter stages the centenary of the Battle of the Somme - the bloodiest of the first World War.

Albert, the starting point of any visit to the Somme region, is just 160 kilometres from Paris and 80 from Lille. It is easily accessible from both Paris airports, Beauvais and Charles de Gaulle. For those travelling by car or camper van, it only amounts to a small and interesting diversion.

The Battle of the Somme is best known for its first day, July 1st, 1916, the worst day in British military history when almost 20,000 British and Commonwealth soldiers were killed. The British assault was preceded by the blowing up of massive mines under the German lines. The scale of those deadly explosions is evident in the massive Loughnagar Crater which is still there today.

More than 2,000 of those killed were with the 36th (Ulster) Division. The most visible reminder of that catastrophic day is the Ulster Tower which overlooks the hilly slopes which the Ulstermen had to traverse under murderous German machine gun fire.

The Ulster Tower is equidistant from two of the most visited memorials on the Somme. The Thiepval Memorial to the Missing is the largest British and Commonwealth war memorial in the world. It remembers more than 72,000 men who fought and died in the Somme and have no known grave. Among them are almost 4,000 men from Irish regiments including the poet and politician Tom Kettle. His name appears first of the 428 men of the Royal Dublin Fusiliers listed on the memorial.

Across the River Ancre is the Newfoundland Memorial Park which remembers the slaughter of men from what was then a part of the British Empire on the first day of the Battle of the Somme. The trench system there is preserved as it was during the war.

Nationalist Ireland is represented by the Guillemont cross which stands outside the church in Guillemont, a French village liberated by the 16th (Irish) Division in September 1916. Close by is the village of Ginchy which was also liberated by the Irish.

There are many places of Irish interest just 35 kilometres west of Lille centred around the old mining town of Loos-en-Gohelle.

The site of the Last General Absolution of the Munsters, one of the most famous paintings of the war, is on the Rue du Bois near the village of Richebourg. One is hardly out of sight of a memorial in this part of France which saw some of the bitterest fighting of the first World War.

A new memorial to the 532 men of the 16th (Irish) Division who died in a German gas attack during Easter Week 1916 has been erected in St Mary’s Advanced Dressing Station (ADS), a war grave cemetery near the village of Hulluch.

The best known casualty buried in the cemetery is Lieutenant John Kipling, the son of the poet John Kipling, who was killed fighting with the Irish Guards during the Battle of Loos. The biggest war memorial in the area is the Loos Memorial to the Missing at Dud Corner. It remembers 20,615 men who have no known grave.

One of the newest memorials is also one of the most impressive. Some 50 kilometres west of Lille and south-west of Lens, another footballing venue for Euro 2016, is the Ring of Remembrance opened in 2014 to commemorate the centenary of the war. It lists the names of 579,606 men who died in this part of northern France during the Great War. No distinction is made between friend and foe. It has provided the inspiration for the Glasnevin memorial wall to all 485 individuals who died during the Easter Rising.

Ronan McGreevy’s book Wherever the Firing Line Extends: Ireland and the Western Front (The History Press) is published on July 1st.

What is the going rate for a home in Co Donegal?
7

‘We poured our hearts and souls into it’: Last orders as landmark pubs and restaurants sell up
8

A simple guide to kitchen appliances: what you need – and what you don’t
9