Dawdling along the Dodder: Lenny Antonelli walks the Dodder river for an alternative view of Dublin 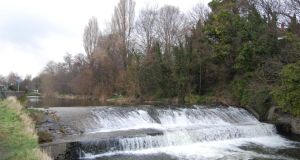 By the time they reach cities, most rivers have deposited their personality: they’re flat, dull, dirty. But the Dodder is different. Flowing from Kippure mountain to the Liffey, it’s a river rich in whitewater and wildlife.

I set out from Ringsend, once separated from the city by the Dodder’s sprawling estuary, until the river was brought under control and the marshlands were reclaimed in the 18th century.

But, in the years that followed, this area was lawless, a refuge for outlaws that was known for its burglaries and highway robberies, according to Weston St John Joyce’s 1921 book The Neighbourhood of Dublin .

A little egret was foraging in the shallows of the river at Ringsend. Once rare in Ireland, these small herons are now common in coastal counties. When breeding they develop extravagant plumage, which was once so popular for decorating hats that it threatened the species.

Walking the Dodder gives you an alternative view of the city, showing you islands of countryside in the suburbs, and fragments of architecture that remind you Dublin was once built around its rivers as much as its roads.

However, this was the wrong time to walk the Dodder. It had flooded after heavy rain and deposited all manner of rubbish along its banks. But every year the Dodder Action group undertakes a big clean-up of the river, restoring it to wildness.

Snow started falling, but anglers braved frigid temperatures on the riverbank. After Donnybrook and Clonskeagh, the riverside paths wind through parklands, passing weirs, waterfalls and rapids.

A watercolour painting titled On the River Dodder near Rathgar by the 18th- and 19th-century artist John Henry Campbell shows a dramatic country scene: tall trees looking over a waterfall, a farmstead on the riverbank, the Dublin Mountains looming behind.

Near Rathfarnham a heron stood motionless on a branch high above the river. A passerby told me this was also a great place to see foxes and mandarin ducks.

A minute later, a group of striking males – white, brown, blue, pine green and orange – flew past. At Bushy Park another man pointed out the best spots to see kingfishers and dippers.

Then, near Firhouse, a flock of starlings – called a murmuration – floated in unison across the dusky sky, creating all manner of shapes that dissolved as quickly as they formed.

Starlings form these huge groupings to avoid predators, keep warm and exchange information such as where good feeding spots are, according to the Royal Society for the Protection of Birds.

A Choice of Emily Dickinson’s Verse

‘Coming home to Ireland felt like a gamble. I felt safe in Korea’
9

Two to savour: A German Riesling and an Austrian Zweigelt, each for less than €8
Real news has value SUBSCRIBE