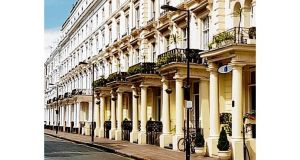 Wedding-cake house: Umi Hotel and (below) a superior room

For me it’s a best friend who keeps creating award-winning theatrical productions for various cultural institutions, and so at least once a year I find myself pointed Thamesward with my shoes polished and my best suit on to bask in his reflected glory. The problem is always where to stay. I simply refuse to spend €150 on a night’s sleep.

For many years I was happy to stay at the YHA London St Pauls, an impeccably clean hostel in the former choirboys’ school beside St Paul’s Cathedral, not far from Tate Modern, but at some point in one’s life sleeping with sweaty-toed Taiwanese and hirsute Aussies loses its allure.

This year I vowed to find somewhere better. I read up on the city’s new budget boutique hotels – Base2Stay, in Earls Court, Hoxton Hotel, near the financial district, B+B Belgravia and the easyHotel in Kensington (which was reviewed in Go last October). Most offer rooms for about £90 (about €100); I chose the Umi Hotel in Notting Hill because it was discounted to £49 (about €55).

The Umi is in one of those wedding-cake houses whose exterior elegance suggests a seediness within. The lobby is bright and funky, expressing the “essence” of Umi, which its literature explains has “a huge Asian influence . . . The name itself acts as our synapse – joining staff, guests and nationalities, breaking down boundaries and allowing a continual flow of communication with everyone who comes into contact with the umi brand”. So there.

Beyond the lobby the Umi is like any other three-star London hotel, with long narrow corridors leading to nondescript rooms. Nondescriptness is not necessarily a bad thing in a bedroom; rather it than some interior designer’s tastelessness.

The room had everything one might need: hairdryer, safe, iron and board, digital TV, room service. It was quiet and not too cramped. The carpet might have been a bit shabby and the bathroom’s linoleum badly fitted, but for £49 I’m not bothered.

A hotel will always be second best to home, and no amount of raw-silk curtains or gold-leaf escutcheons can make up for the fact that one is away from one’s spouse, Burmese cat, snuggle blankie or whatever.

Breakfast is served in Yumi Cafe, in the lobby, a wonderfully vibrant place that effortlessly evokes the chic, metropolitan feel that so many Irish cafes aspire to in vain. The secret seems to be the multicultural make-up of the staff and clientele, a complex melange of Bahraini, Brazilian, Thai, Bangladeshi, Portuguese and more – a spectrum so much wider than the few Poles and Chinese on whose presence we base the term multicultural in Ireland.

Being among so many different people of different backgrounds, all alert and active, chugging back coffee in the million-watt sunlight of a London morning, is inspiring. It challenges one to up one’s game, to throw off the muggy lethargy that infuses us all after too long in Ireland. I felt gunned up and ready to take on the world. And that’s what London is all about: it’s a shot in the arm, and if I can get that for £49 I’m happy.

Although a continental breakfast was included in the price, I paid an extra £6.95 for a full English, which had an unwittingly medieval theme: a turret of scrambled egg, a carp pond of baked beans, a battering ram of Lancashire sausage and a drawbridge of potato waffle. I have trouble taking beans or potato waffles seriously when they’re presented outside a nursery, but leaving that aside the rest was good, and even the nursery fare was compensated for by excellent Fairtrade coffee.

I’ll be returning to the Umi, not because the brand seems to like boundary-breaking gobbledegook but because it’s cheap, clean, very friendly and ideally located, beside Bayswater and Queensway Tube stations and a short walk from Kensington Gardens and the Serpentine Gallery.

And for all its synaptic folderol the company has come up with one fresh idea: a concierge called Victoria who’ll arrange cut-price tickets to West End shows and queue-jumping tickets to places like the London Eye and Madame Tussauds.

AccessWheelchair access to rooms and facilities on the ground floor.