Enjoy the clear waters, relaxed atmosphere and wonderful food of this northern peninsula in Croatia 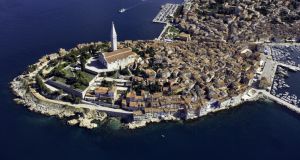 The serrated costline of Istria, Croatia 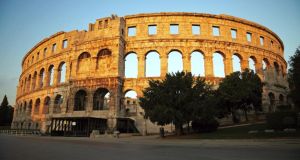 Before the plane even landed in Pula, I felt I’d already had a glorious ad-hoc mini tour of Istria, the northern Croatian peninsula. We flew in over a serrated coastline studded with small rocky islands, some with single houses on them, over turquoise waters that were so clear I swear I could even see the fish that swam far beneath.

Istria is the biggest peninsula in the Adriatic Sea, and I can’t say I’ve seen them all, but it’s currently top of my list of Adriatic Sea Peninsulas. The fabulous coastline defines the entire place. There are no traditional sandy beaches, but what there is in every town and village along the coast are ladders down to that utterly clear water for swimmers, and sometimes carved-out rockpools for children. Local people go for a swim in Isteria in the way you’d pop out for an evening walk in Ireland.

Pula is the peninsula’s main town, and it has a surprising and surprisingly well-preserved collessium, one of only six in the world, including those at Rome and Verona. It’s used as a natural amphitheatre for concerts these days, and can hold up to 10,000. “For Leonard Cohen, there were chairs. For Marilyn Manson, there were not,” our guide divulged. It was here in this marvellously atmospheric place that we and thousands of locals watched the opening match of the World Cup, when Croatia was thrown to the Brazilian lions and given a mauling.

Further up the coast is beautiful Rovinj, a small coastal fishing town famous for its cluster of privately-run galleries and period architecture. You can swim off the rocks here, as we did, first changing in the bathrooms of the sea-front Puntulina restaurant we later ate in. We could almost have called our order in from the sea. They minded not at all that their restaurant guests arrived fully dressed, and temporarily departed in swimsuits. Here; as elsewhere, the menu showcased excellent local seabass, squid, anchovies, sardines, and tuna tartar. The tuna fish features on Croatia’s two kuna coin, but most of the country’s significant catch is exported to Japan.

State gifts come in many forms, but I did not expect to find them in the form of ageing exotic animals on the island of Brijuni. Designated a national park since 1984, this extraordinary time-capsule place has a hotel, the Neptune, whose interior could be a stand-in for the Grand Budapest Hotel, and a still-producing olive tree that is a staggering 1,600 years old. As for the zebras, lamas, ostriches, horses and a lone elephant that wander surreally around a section of Brijuni, these are all ancestors of gifts given to Josip Tito, the first president of Yugoslavia, by some of the 100 heads of State who visited him here. Lanka, the lone Indian elephant, was the gift of Indira Ghandi, and still survives today. Ferries run the half-hour journey from Pula, and you can either rent bikes or golf carts to explore.

I learned a few things when in Istria. That if you buy olive oil in a clear glass bottle, you needn’t expect much from it; decent oils are bottled exclusively in dark glass, because light, oxygen and temperature are the collective enemy of olive oil. We tasted superb olive oil at Chiavalon’s olive grove in Vodnjan, and they sell their products at Pula’s duty free.

I learned that white truffles can cost up €5,000 a kilo, whereas black ones are a virtual bargain, at €300 a kilo. The best dogs for truffle hunting are female, as were the nine we saw at the Karlic family’s estate in Buzet. “Because they can focus better and don’t get distracted,” they told us. Here, you can have a truffle omelette brunch and go truffle-hunting with one of those clever little dogs whose noses are like diviners.

I learned that some Croatian people, including our guide, love olive oil so much they put it on icecream. I won’t be doing that. But neither will I be leaving my bottle of olive oil out on the kitchen countertop any more. From now on, it’ll be kept in the dark away from the light, like a truffle before it’s discovered.

Rosita Boland travelled to Istria as a guest of the Croatian National Tourist Board and Park Plaza Histria Pula.

Getting there Aer Lingus flies twice weekly from Dublin to Pula until October 11th. Fares start at €69.99 one-way. aerlingus.com

Accommodation Doubles at the Park Plaza Histria Pula from €119 per room. parkplaza.com/croatia

A really special bar Valentino’s seafront cocktail and champagne bar in Rovinj is partially carved out of the cliff face, where you can sit on cushions. valentino-rovinj.com

A restaurant in a vineyard Even if you’re not staying in the remote four-room Relais & Châteaux Villa Meneghetti, which has its own vineyard, you can eat there. Sample starter: green ravioli filled with squid, on a cold codfish cream, €16. meneghetti.info croatia.hr