A year after the end of her marriage, the winner of the 2015 Irish Times travel writer competition, Ruth Petherick, finds enduring love in mother India. 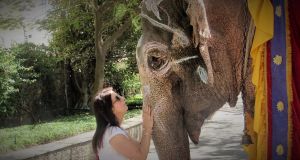 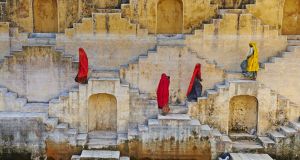 Women at the Rajasthan water tank in Jaipur 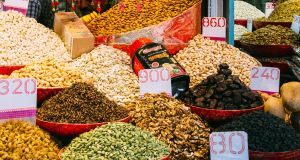 On the day of my departure, I post a picture of an elephant to my Facebook page with the caption, “Let the adventure begin”. His decoratively painted head captures the exciting journey I imagine lies ahead of me in India. Standing in Delhi airport 15 hours later as our group begins to form, I look at the faces of what could be the cast of the next Best Exotic Marigold Hotel and my excitement is replaced by apprehension.

Someone mentions a “game of bridge” and my heart sinks. I picture 11 days of polite conversation and wish I’d been sent on a solo trip. India, however, has a way of taking you by the hand and teaching you the lessons you most need to learn. The first of mine turns out to be humility.

Our tour guide, Abhi, is a cross between Michael Palin, Billy Connolly and Mahatma Gandhi. As we drive, he regales us with long, meandering narratives, peppered with lively wit and eastern philosophy. On our first day, he explains the Indian greeting, Namaste. Guru-like, at the top of the bus, he teaches that the term means much more than the literal translation, “I bow to the divine in you”.

When we bow to one another and say Namaste, what we’re really doing, he says, is cutting through those differences that separate us such as race, gender, sexuality and age to connect with our common essence. It’s a simple but powerful lesson. I feel moved and chastened and I find myself looking at my travelling companions in a new light. Something in me loosens and, over the next 11 days, so many of my preconceived ideas of myself and others begin to melt under the hot Indian sun.

It’s hard to explain what India is like. She is unapologetic in her effusiveness. From the moment you arrive, she’s in your face. The noise hits you first, the cacophony of beeping horns, then the colour and the mayhem. Women in brightly coloured saris sit side-saddle on the backs of scooters with babies in their arms.

There are traffic lights and road markings but no one seems to notice. Cows wander languorously through the chaos. Everywhere there are piles of rubbish and filth, but somehow this is not what the senses are most drawn to.

One of our first excursions is a rickshaw ride through the bustling Chandni Chowk market in Old Delhi. Our driver negotiates the cramped alleyways with hair-raising skill and we witness close up the intoxicating mix of mess and magnificence that is Indian life. The inquisitive stares of the locals relax into broad, playful smiles. This, then, is my first taste of India: unruly, unkempt and utterly captivating.

I soon discover there is another, softer, side. In Agra, we visit the Taj Mahal at dawn. Nothing prepares you for the size and splendour of the white marble edifice, 22 years in the making and forged by more than 20,000 pairs of hands. I’m overwhelmed by the unwavering devotion which inspired it. Since my marriage ended almost a year ago, I’ve been wondering if there really is such a thing as enduring love. I leave the group and sit alone on a bench to write.

Young Indian men approach me, not for the first time on the trip, to ask if they can have a photograph with me. “You’re very beautiful,” one says. It’s been a long time since anyone has said anything like that to me and, although I understand the fascination is mostly with my white skin, I realise with a jolt how much I’ve missed hearing it.

Another man approaches and asks to take a photo, not of me, but of my writing. “Your writing is lovely,” he remarks. I know that he means my handwriting, but I want it to be true also of my words. And there, with the Taj Mahal iridescent before me in the early morning sun, I think perhaps I understand what Princess Diana meant when she described her visit to the site as “very healing”.

The tears come and I let them.

Despite my initial misgivings, my fellow travellers turn out to be a diverse and delightful group, ranging from 32 to 81. By day we move, sometimes together and at other times alone, through the grand palaces and forts of Rajasthan.

Everywhere we go, I am drawn to representations of a Hindu deity with an elephant head. I ask Abhi who he is and he tells me he is Ganesh, the god of new beginnings and the remover of obstacles. Over dinner in the evenings, we reflect with disarming honesty on the impact India seems to be having on us all.

On one occasion, needing a break from sightseeing, I escape with Rod, the 81-year-old, and we have an adventure together in a tuc-tuc. He takes pictures on his iPad and we squeal like children as we swerve and bump our way through the streets of Jaipur, the pink city, and ironically the location where much of the Best Exotic Marigold Hotel was filmed. As we disembark at our hotel, I tell him there is no one I would rather have shared the experience with, and I mean it. Namaste is a potent force.

Our route takes us up into the Aravalli Mountains. As we rise, the landscape changes dramatically. Parched fields give way to lush sweeping valleys. Our bus driver clearly drove a rickshaw or tuc-tuc in a former life as he navigates the narrow cliff-top roads with dexterity and nonchalance. It is quiet here, lazy in the dense dry heat. Langur monkeys, with black faces, grey fur and long tails, squat on the low walls, their arms resting on their knees like old men waiting for something to happen.

We encounter a farmer working a water wheel with a cow, an image reminiscent of Ireland long ago.

Nearby, women working in a field pause to watch us. They pull their scarves shyly over their faces and I indicate with my camera for permission to take a photograph. They nod, but once I’m done, they extend their hands for payment, a practice that has both saddened and amused me throughout our trip.

It’s a simple reminder, if one were needed, of the poverty of the Indian people, but also of their bold, irrepressible spirit.

In the Jain temple of Ranakpur, the knot of ego continues to unravel. The audio guide makes for a contemplative tour and I’m lost in the ancient intricate carvings of the almost 1,500 pillars, no two of which are identical. Near the entrance, I come across another elephant, a marble statue carrying the mother goddess on his back. The guide tells me Jains consider it good luck to climb under the elephant and, disregarding my innate fear of looking ridiculous and the fact no one else is doing it, I climb under and emerge feeling liberated.

Our final outing is a boat trip at sunset on Lake Pichola in Udaipur, the Venice of the East. In the opulent setting of Jag Mandir, the Lake Palace, we belatedly celebrate St Patrick’s Day.

Nora and Rita, two lovely spirited women to whom I’ve grown close, dance a jig while Dave and Joe lead us all in I’ll Tell Me Ma. Our voices and our laughter ring out over the dark water, wonderfully discordant and ebullient.

On our last day, we have a few hours free before the bus collects us for our flight back to Delhi. We make a brief trip into Udaipur for some last-minute gifts. As we return to the hotel, a train of camels is being led up the road. They are dressed in elaborate red-velvet capes, and the guard tells us they are being readied for the festival of Holi, which we will sadly miss by one day. The camels are followed by horses, similarly attired.

We think the parade has ended, when a lone elephant turns on to the road. From a distance I can see his face is painted. As we take photographs, he raises his trunk and shifts uneasily. I approach him and place my hands gently on his trunk. He settles and we lock, eye to eye. It feels as if I’ve travelled all this way just to meet him. “Namaste,” I whisper.

Then I am praying, the first prayer I’ve said in many years. It is a prayer of gratitude, for a journey that has brought me half way round the world with the kindest of strangers, to the place where life began, and a country so unashamedly herself, in order to shed my skin and begin again.

Ruth Petherick was the winner of the inaugural ‘Irish Times’ Travel Writer competition held last autumn. Her prize, sponsored by Travel Department, was a trip to India on which this feature is based. Ruth went on the “Occasions India – Splendours of Delhi, the Taj Mahal & Rajasthan” holiday which costs from €1,699pps. There are some solo-friendly dates available from €1,729; traveldepartment.ie