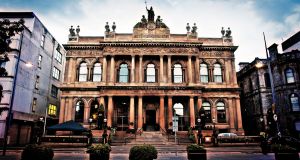 SEASIDE SOJOURNS Lobster trawl in Connemara: Join John the skipper at Roundstone pier and go on a three-hour boat journey (below). Visit the deserted island of Inishlacken, fish for mackerel and pull up some lobster pots before returning to Ballynahinch Castle for the night with fresh supper, from €255 per person; ballynahinch-castle.com Whale watch in Iceland: Iceland is one of the best places in the world to witness a whole range of whales. From May until September is the best time to go. Flights at wowair.com, tours from €69 at elding.is Surf in Hawaii: Hawaii’s endless rolling waves and tropical beaches make it the best place in the world to catch the surf. See gohawaii.com for details.

NEWS Global Vision: The annual National Geographic Photographer of the Year awards is officially closed while judges make the difficult task of selecting a 2016 winner (to be announced in July). Until then, peruse the awe-inspiring imagery of the world’s most remote and celebration destinations at ravel.nationalgeographic.com.

Belfast’s Best: Belfast’s boutique hotel The Merchant (above) is raising a toast this week, as their barman Andrew Dickey has been crowned World Class Irish Bartender of the Year 2016. Dickey’s cocktails came out on top in the prestigious mixology competition against six finalists. He will go on to represent Ireland in the World Class Global Final 2016 in Miami in September. Taste what all the fuss is about at themerchanthotel.com.

Air Time: Good news for New York lovers: Delta Air Line, which celebrates its 30th anniversary of service to Shannon this year, has reopened its non-stop service from to JFK this summer. Late evening flights plus on-board wifi have us planning a midsummer Big Apple escape, delta.com.

GET ’APPY Citymapper: This app covers 30 cities and combines Citibike routes, rail, tram, taxi and every other mode of transport to help you reach your destination. Download it at the app store, citymapper.com DEALS HUNGARY: Budapest, explore the city that straddles the Danube, three nights in four-star Mediterran Hotel, from €259pps with flights, clickandgo.com, (01)-539 7777. PORTUGAL: Madeira, stay in the famous Reid’s Palace in October, a week with flights and private transfers, from €1,449pps, platinumtravel.ie, (01)-853 5000. US: Discover the west in a 14-day coach tour visiting national parks Grand Canyon, Yosemite, Bryce Canyon, Los Angeles, San Francisco and more from €1,999pps, americansky.ie, (01)-664 9979.