Check in: Glorious gardens, budget flights to Miami, and there’s an App for that 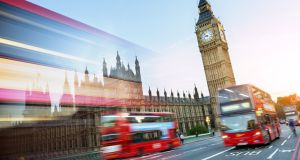 London: A new “hopper” bus ticket is to be rolled out across the English capital

Miami heat  Icelandic airline WOW Air has announced a new route from Dublin to Miami, from €139 one way. This is to be the eighth US destination offered by the low-cost airline, which flies via Reykjavik. Flights to Miami from April, three times a week. For more routes and offers.wowair.ie

Hop to it  Great news for those who frequent London for work or pleasure. A new “hopper” bus ticket is to be rolled out across the English capital (above), making it cheaper to get around. An estimated 30 million bus journeys, currently costing £1.50 each, will now become free annually, plus passengers can make a second journey free of charge if they travel within one hour of beginning their first. Oyster card holders will automatically avail of the new charges and allowances.

Award-winning spa The Spa at 5-star Ashford Castle in Cong, Co Mayo has been named Ireland’s best hotel spa at the 2016 World Spa Awards in Sardinia. The spa, which opened in 2015, includes a Turkish Hamam, steam room and pool. And if a night at the 800-year- old castle is beyond your budget, a Swedish massage starts at €75. ashfordcastle.ie

Castle Durrow: Let head gardener Bart take you through the visual feast of the sunken, walled and rose gardens which bloom fully from May until September (below). He might even treat you to a small bunch to take home; castledurrow.com

Giverny: Claude Monet’s gardens in France are still in all of their glory this month. See the famous Japanese bridge and water lily pond; giverny.org

Garnish Island: Take the ferry to this island garden, the result of the creative partnership of Annan Bryce and Harold Peto. The gulf stream is to thank for this hidden paradise, decorated with rare botanical beauties; garnishisland.com

Washington hotel The Dupont Circle is offering guests a Republican or Democrat-themed package. Republicans will receive hand-rolled cigars, a gift card for Brooks Brothers (where Abraham Lincoln had his suits made) and a round of golf in honour of Dwight D. Eisenhower’s favourite pastime. Democrats can look forward to tickets to The Spy Museum, cheeseburgers at Bar Dupont (Bill Clinton’s cheat meal), and a VIP tour of the Verizon Centre, where Barack Obama played basketball growing up. From $629 + tax (€560) per night for a two-night minimum stay. doylecollection.com/dupont

Amount: This unit and currency converter allows you to convert more than 700 units spanning more than 30 categories, from currency to clothing. Download it at The App Store.