A walk for the weekend: The Twelve Bens of Connemara are a hard walk but worth it

The nine peaks of the Glencoaghan Horseshoe provide exhilarating mountaineering 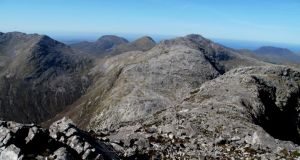 The glistening quartzite peaks of the Twelve Bens of Connemara form a mountain landscape unique in Ireland and it is one that any serious walker will be drawn to eventually. Some of the Twelve Bens are difficult to access but there is a cluster of peaks at their core which are accessible directly from the roadside. Even if you had to crawl across bogs to get to them, it would be worth it as the nine peaks which form the Glencoaghan Horseshoe provide some of the most exhilarating mountaineering on this island.

There is no real benefit as to whether one goes clockwise of anticlockwise but if you have only one car, it is best to park outside Benlettery Youth Hostel and get the road walk out of the way at the start.

This brings you east along the N59 to a third-class road which leads into the glen. About half way along the road, the spur leading up to Derryclare (677m) begins to rise on your right. Cross over by the distinctive Lop Rock and ascend the rocky surface to this first peak, from which you not only get a good perspective on the circuit but also of the Maamturks to the east and the lake-speckled lowlands of Connemara.

Being careful on some of the small rock steps, drop down on to the col and then up the well-trodden path on to Bencorr (711m), the highest peak on your route. Here you get the full flavour of the Bens with their sinuous ridges of rock unblemished by vegetation, formidable cliffs and sparkling scree slopes.

While the rock from a distance appears to be completely devoid of plant life, up close clumps of heather and grass cling tenaciously to crevices. Bencorr is known locally as the “Soldier’s Mountain”. It was here that one of the main survey points in the initial triangulation of Ireland was established by the Ordnance Corps of the British army; they were able to take bearings on peaks as far away as Mount Brandon.

A stony 200-metre descent leads to the Devil’s Col from where a bare slab of rock leads on to ascent of Bencollaghduff (696m). A ridge of varying widths curves around the northwest corner of the horseshoe leading to Benbreen (691m). You need to concentrate on picking your route. This is certainly a climb I would only take on under the clear skies of an anticyclone.

The descent from Benbreen is on a steep scree path which is hard on already tired joints, which you then have stretch even further on the scramble up to Bengower (664m). The trek across to Benlettery is straightforward although the pull-up to the latter will suck up the last resources of your tired legs.

It is, thankfully, the last peak and you can begin a careful descent of the initially rocky ground to the rear of the youth hostel, where you will find a spot to cross the fence and then down by its side to lift yourself gratefully over the stile – your last exertion of a sublime day.