Longhaul holidays to see the world 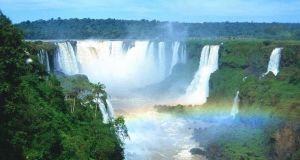 Iguazu Fallon on the border of Brazil and Argentina in South America. Photograph: Getty 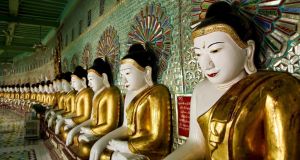 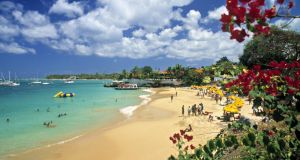 See the sun rise in Japan
If the Land of the Rising Sun has risen to the top of your travel wish list, check out the packed new 11-night programme from Travel Department, covering everything from the high-rise, high-tech attractions of Tokyo to ancient traditions such as geishas and tea ceremonies. Ride the bullet train, explore historic Kyoto and find out how Hiroshima has recovered from its past. Departs September 10th with prices from €3,429. traveldepartment.ie

Go Coco in Tobago
Chill out in the award-winning Coco Reef Resort & Spa in Tobago, which is perfectly poised between two of the island’s best beaches, Store Bay and Pigeon Point. Enjoy great water sports, golf and tennis, or stay put on the hotel’s strip of sandy heaven, Coconut Beach. Departs May 1st for seven nights from €1,259 via London.
joewalshtours.ie


Chop chop China
China’s too big to swallow whole but you can get a good flavour of it with this nine-day Taste of China tour taking in Beijing, Xi’an and Shanghai. The fully guided tour – which requires a minimum group of just two – includes the Forbidden City, the Great Wall and the terracotta warriors plus theatre shows and acrobatic displays by night. From €1,835pps including flights.
topflightworldwide.ie


Boutique Thai
February is a great time to visit resorts on the Thai island of Koh Samui; it’s still the dry season but it’s not yet too hot. Stay two weeks’ B&B in a private villa at the Arayaburi Resort, in the north of the island on Samrong Bay. Well off the beaten track, this one is all about lounging on the beach, relaxing in the lush gardens and enjoying traditional Thai massages by the pool. Bliss. Departing February 23rd, from €1,254.
abbeytravel.ie


Abu Dhabi do
Feel worlds away – with just a seven-hour flight – at the Hotel Danat Resort Jebel Dhanna, a beachfront property in Abu Dhabi. Departing May 21st, stay at the five-star property, close to the wildlife reserve at Sir Bani Yas Island, on an all-inclusive basis for €1,084pps including flights.
gohop.ie

She sells Seychelles
This is the UN International Year of Small Island Developing States and, because they don’t mean us, the least we can do is support one of the others. Stay seven nights at the Banyan Tree on Mahé, amid lush hills overlooking the Indian Ocean, from €6,018 for two, departing January 25th, including flights and unbeatable views from the private pool of your private villa.
tropicalsky.ie


Under budget Down Under
If a trip to Oz would be wizard this year, stay in the Oaks Goldsbrough, a four and a half star apart-hotel in Darling Harbour, right in the Central Business District. Stay self-catering in one of its one-bedroom apartments for three weeks in March, from €1,988pps including flights, giving you plenty of time to explore at your leisure.
mercurydirect.ie


Break for Burma
Now that Myanmar/Burma is back on the travel map, see it before mass tourism gets a hold with this 17-day highlights tour starting at Yangon (Rangoon) and including a two-day cruise to Mandalay and the Sagaing Temples. Visit the Golden Caves in Shan state, which have 8,000 images of Buddha on their walls, and spend a day on Inle Lake with its floating markets. From £2,589 including UK flights.
responsibletravel.com


Take two to tango
Don’t miss a beat with a tango and bossa nova package that starts out in Buenos Aires and finishes up with a flourish in Rio de Janeiro 11 days later. Along the way, join the conga line to the spectacular Iguazu Falls. Prices vary depending on accommodation but start at €1,795pps, including flights.
nuevomundo.ie

Escape to the Cape
Mark the great man’s passing with In Mandela’s Footsteps, a 15-day package including Cape Town and the Drakensberg mountains, historic sites and museums along the way, including a visit to Robben Island before winding up in the scenic Cape Winelands. From £2,770pps including international flights.