The Times We Lived In: When Shostakovich met deValera 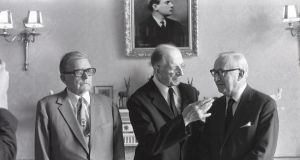 Dmitri Shostakovich (left) with president Eamon de Valera and the Provost of Trinity, AJ McConnell, at Áras an Úachtaráin

‘A t least for four days nobody will be able to ring me up, and nobody will ask me anything about anything. That’s already a bonus.” So wrote the composer Dmitri Shostakovich as he and his wife Irina boarded a boat at Leningrad, bound for Ireland and the conferring of an honorary doctorate at Trinity College, Dublin.

Our picture was taken a couple of days later, when Shostakovich was received at Áras an Úachtaráin by President Eamon de Valera.

Having spent so much of his composing life doing a complicated dance with the Russian state – where he had, several times, fallen foul of the demand that music had to be “democratic”, aka tuneful and accessible – perhaps Shostakovich was slightly uneasy at finding himself in front of a foreign presidential fireplace.

At any rate he looks, to coin a phrase, a bit out of it, standing stiffly apart as Dev engages the Provost of Trinity, AJ McConnell, in animated conversation. Perhaps the Provost has just told a joke along the lines of “How many theoretical physicists does it take to change a light bulb?” Certainly the president’s hand gesture suggests some intricate ongoing mathematical calculation.

One way or the other, the guest of honour doesn’t seem to be sharing in the general bonhomie. A nervous, obsessive man at the best of times, Shostakovich had had his second heart attack shortly before our photo was taken and had been in hospital for several months. He would, in fact, die within three years.

Maybe that explains his downturned mouth, unhappy shoulders and downcast demeanour. Or maybe he’s mulling over his String Quartet No 14, which he would begin immediately after this trip and whose second movement has been described as “a beautiful varnish covering a fathomless depth of anguish”.

On the other hand, maybe he has just spotted the cheapo African animals on the presidential mantelpiece, and is trying to work out whether he has fallen prey to some obscure international socio-cultural prank. Archive photographs and other Irish Times images can be purchased from irishtimes.com/photosales

Who is responsible for repairing a dangerous boundary wall?
2

Has lockdown reduced the number of premature babies? This doctor thinks so
3

A family favourite cake, piled high with the best of berries
7

As lockdown begins to lift, once again I feel like a trapped bird
8

Full-time caring: My husband had to become my carer
10