The Sobriety Diaries – week three: ‘I’m not counting the days until I start drinking again’

Three weeks without drink, one more to go. But it’s not like leaving society – I’m going out more than ever, and readers are chatting away to me 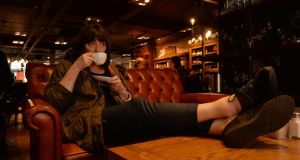 Oh yes, the consumption of alcohol among the Irish. Last year there was a fall of 7.7 per cent, to 10.73 litres of pure alcohol per person per year. These falls, based on figures produced by the Revenue Commissioners, have been interpreted as a sign of decreasing consumption.

All right, so the second set of figures, which were originally in gallons, relates to the years 1831 and 1838, and is taken from Paul A Townsend’s excellent book Father Mathew, Temperance and Irish Identity. Those figures come from a time when the population of this island was 7,767,401 (in 1831) and 8,080,400 (in 1838); the latter figure is an estimation.

It must be remembered that they are based on whiskey on which duty was officially charged; there was no way of estimating the amount of alcohol produced by Ireland’s thriving illegal distilleries. With humans and alcohol it seems it’s all a cycle, really.

Pineapple rings This week I’ve mostly been thinking about the private versus the public experience of alcohol. That’s what happens when you have been feasting periodically on pineapple rings and Bournville. (“Not a pound,” said a man who had given up alcohol for a month, bitterly. This message was relayed to me from Australia. “Tell her I didn’t lose a pound,” he said.

Several men said the same. They seem more optimistic about the prospect of immediate physical improvement once you’re on the wagon. Women know you’re going to have to pay for your abstinence, at least at first, in Maltesers, cheesecake and peanuts. The miracle is that I haven’t put on any weight, as far as I know.)

On a personal level, and entering my fourth week free of alcohol, I’d like to thank Richmond Marketing for dropping in to The Irish Times a bag containing two dozen alcohol-free beverages. It was murder smuggling them past the newspaper’s ethics committee, but I’m delighted I did.

In other news, I’ve had two road-rage incidents in the past seven days – and, no, I’m not sorry. For me the biggest side effect of not drinking could turn out to be increased use of my car, with the consequent rocketing expenditure on parking. Also, I’m a bit impatient socially, as in: “Yeah, yeah, yeah, that was quite funny. Now let’s get on with another story . . .”

Strangely enough, I’m not counting the days until I start drinking again. Although several colleagues I’ve never got drunk with now say they’re looking forward to getting drunk with me, which I find sort of flattering, in a rather pathetic way.

We are herd animals, after all, and alcohol includes you in the herd. One reader who emailed after last week’s diary – and your emails are a great pleasure – wrote: “Stopping drinking is like leaving society.”

I don’t feel that way. I’m going out more now that I’ve stopped drinking, I’ve got Irish Times readers chatting away to me, and several close friends who don’t drink are very helpful, in a bitter-and-twisted sort of way. But I do understand the sentiment.

Lies and bravado The power of the group is strong. When it comes to alcohol we all operate on an adolescent level of lies and bravado. Only in anonymity do the individual realities get aired with strangers: the times that mothers bathed their small children while drunk, for example. That’s not a piece of information that will routinely be brought to a hen party, is it? But it’s posted on one of the many sobriety blogs. Privately.

It seems to me that our relationship to alcohol has never changed. One of the constants in it is the way people mobilise into groups to help each other refrain from or control their alcohol consumption. Even Soberistas, the website that allows people to communicate with each other anonymously, has now started having meet-up sessions. One is planned for Dublin later in the summer, probably in August.

The temperance movement of the 19th century – which started in the United States – knew the power of the collective. It is interesting and touching to read of the spread of Temperance reading rooms, and tea rooms, and even of bands sweeping across Ireland with such success in a movement that started in 1838. There was talk of national regeneration.

“By 1843,” writes Paul Townsend, “ every indication was at least half of the adult population of Ireland had taken the pledge [to abstain from alcohol], while public drunkenness had virtually disappeared in many areas.”

But the movement fell apart, even before the Famine started in 1845, and it ended in disaster for poor Father Mathew. He wouldn’t have been too excited about the latest figures on our falling alcohol consumption. He’d seen it all before.