The Irish parishes forming new links with the diaspora

Ireland Reaching Out allows Irish people to reach out to their parishes’ descendants abroad, instead of waiting for them to find their way here 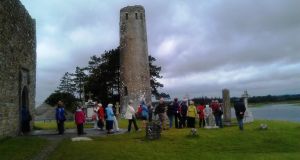 Ireland Reaching Out enables communities to form new relationships with the diaspora, but half of Ireland’s parishes are still disconnected

Ireland Reaching Out enables communities to form new relationships with the diaspora, but half of Ireland’s parishes are still disconnected.

When Christine Timoney came to Ireland for the first time to follow the traces of her Irish roots, searching for the place where her ancestors had lived, she left dissatisfied with the information she had found.

She couldn’t find the place they had called home, the paths they might have walked every day, and she couldn’t bring back any stories that people had passed on about her family.

When she came to Ireland the second time a few years later it was a different experience. This time she had started her journey on the of website Ireland Reaching Out which is at the heart of the successful Ireland Reaching Out programme that aims to reconnect the diaspora to their place of origin in Ireland.

That’s how Christine got in touch with Tim Lee in Bournea, Co Tipperary, genealogist and founder of the Bournea Reaching Out group that organises events around the history of the area and uses the IrelandXO.com website to connect with people who have their roots in the parish.

“Christine contacted us through the website so we had exchanged a few emails before she came to Ireland,” he says.

When she arrived in Bournea, the Ireland Reaching Out group had already helped Christine to find accommodation. Someone welcomed her in the local pub at her arrival and, based on some research, showed her the place where her ancestors might have lived.

“Having someone waiting for them makes it so much easier for people to come back. And with the group behind it, when they meet one of us, they meet the whole parish with all its connections and stories,” Tim explains.

“Christine didn’t want to go home in the end. We even had a going-away party for her and we are still friends now.”1

That’s what Ireland Reaching Out is about: building relationships between people in a parish and people coming back.

“There are 70 to 80 million people with Irish heritage, living around the world,” Mike Feerick, founder of Ireland Reaching Out, says. “Many of them don’t even have an idea that they have their roots on the island. And each of them has a connection to at least one Irish parish.”

He had the idea for the organisation during the recession in Ireland about seven years ago. “I wanted to do something to help the country regenerate itself and thought ‘Ireland is not harnessing the power of its diaspora as it should; it’s disorganised’. I wanted to funnel that energy back into Ireland.”

That’s how he came up with the idea to build a platform that allows Irish people to reach out to their parishes’ descendants abroad instead of waiting for them to find their way here. He calls it “reverse genealogy”.

There are 3,500 volunteers like Tim Lee around Ireland today, part of this mission, working in parishes north and south of the Border. To get to the full coverage, Mike and his team at Ireland Reaching Out have focused on making the work easier for the hobby genealogists and community groups.

Earlier this month, Ireland Reaching Out launched a website with new functionality. They will be able to get access to copies of all church records of the National library and also bring an exciting innovation to the site.

“We have a partnership with Google that will allow us now to map houses and to see who has lived there,” Mike explains. “That’s the main interest most of the diaspora visitors have when they come back.”

Tim has taken some of these walks to places where ancestors of a visitor had lived. He remembers one of them with a woman from America, looking for the graves of her ancestors named “Hockney”.

That visit helped Tim discover the secret behind an old saying in the area, when there is a cold wind coming in. “People sometimes call it Hockney’s wind. I heard my uncle saying it years ago but I never knew where it came from,” relays Tim.

It turned out that the ancestors of the American woman – one sister and two brothers – had all died in one week in the 1840s, at a time when there was a cold wind coming in from the east. “That’s where the saying must have originated.”

These are the stories that Ireland Reaching Out groups discover by digging in census, church or tax records and sometimes also old weather reports they can find on the Internet. It doesn’t just bring them closer to their diaspora, but also to their very own history.

The Ireland Reaching Out group in Bournea organises historical walks and comes together every month to tell stories. “Hopefully we can play a small part in our generation to keep the memories and to pass on the stories that were past down to us. I think every generation has a duty to do this and hopefully as a group we can keep our parish history alive,” says Tim.

Anyone who wants to learn how to dig for these stories and join or start a group in a community should connect with Ireland Reaching Out directly through their website: www.irelandxo.com. 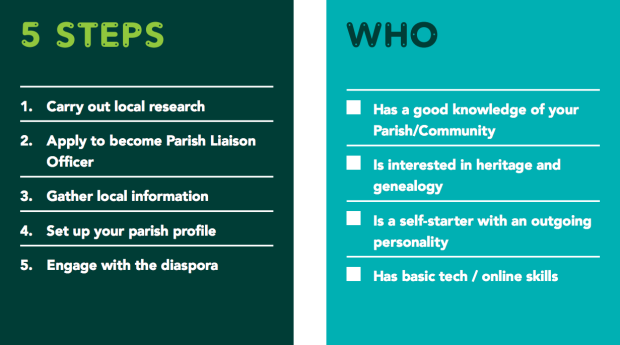