The Titanic Experience in Belfast is one of the most visited tourist sites on the island, and surely one of the loudest 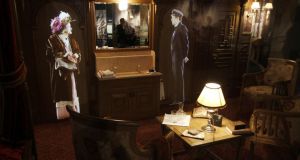 Projected images of people in a replica first-class cabin in the Titanic Experience. Photograph: David Moir/Reuters 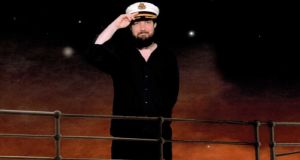 Down the Belfast docks there’s a big, pointy, monolithic building that looks a bit like the vehicle the Jawas drive in Star Wars. Outside is a big sheet of metal with the word “Titanic” cut out of it.

This is the home of the Titanic Experience, in which the best of modern technology is used to bring the past alive, or at least reanimate its corpse using levers and pulleys, like in Weekend at Bernie’s. Two years after it opened, it is one of the most visited tourist sites on the island.

In the lobby, people from all over the world are swarming up escalators. Children carry iPads, adults carry children and in the cafe, men in flat caps and braces carry trays of food.

I start by getting a cheery photograph taken with a sea captain’s hat on, against a projected backdrop of a ship on which thousands of people died. The next couple re-enact the bit in which Jack helps Rose “fly” in the film.

Then I head towards the first room of the exhibit, which evokes “Boomtown Belfast”.

Boomtown Belfast is noisy. Large photos of the olden days city fill the walls, while animated silhouettes of olden-day folk hustle and bustle to and fro across them. Everything is loud and active, presumably because youngsters these days aren’t hugely interested in 19th-century Belfast’s flax industry. The little devils. It all feels a little like propaganda commissioned for a historical chamber of commerce.

On one wall there is a projection of two costumed actors having an expository conversation that includes sentences such as, “British ships built with American money? What is the world coming to!”

There are replicas of newspaper hoardings and advertising posters everywhere. There’s an “interactive floor” featuring animated designs for the Titanic, much like the interactive floor Bruce Ismay himself must have used. Everything is new and glossy. The walls move. There is nothing old in the Titanic Experience. The next section is The Shipyard. There must be builders in, as there is an omnipresent sound of hammering that can’t be deliberate. We are guided up a lift in a replica of the Arrol Gantry, where the Titanic was built, and shepherded on to a pneumatic cable-car ride that shoots up, down and across, alongside clips from a documentary about ship-building. This helps us imagine what the past would have been like with a pneumatic cable car in it.

Later, there’s a jolly animated infographic about all the cargo and people who drowned. There are replicas of various first- and second-class cabins and an immersive panoramic section in which every layer of the Titanic is depicted, from the engine room up to the fancy staircase Leonardo di Caprio descended in the movie.

In another room, survivor testimony is broken up by sounds of Morse code and a huge projection of an actor in a frock coat asking investigative questions. There’s also a life-sized replica of a lifeboat, an exhibit representing all of the films that have been made about the Titanic, “an underwater exploration theatre” about the subaquatic Titanic, and an interview with the iceberg, who is very sorry. Then at the end, everyone is waterboarded so they can experience the sensation of drowning (I might have made those last bits up).

What some people like about the Titanic Experience is that nothing is left to the imagination and there is no time for silent contemplation (although some reviews on Trip Advisor actually complain that there is “too much to read”). All comers leave blinded and deafened by the past, with factoids clinging to their clothes and hair. Here history is externalised in a glossy, flashy gibber, always fearful that people might not be interested in it for its own sake. The past feels small and distant, perceived through 3D glasses darkly.

By the end of my Titanic experience, I totally get the point they are trying to make: interactive modern technology is brilliant and the silly old Titanic wouldn’t have sunk if it had been built by the people who built the Titanic Experience, which won’t date and will continue to draw tourists. The Titanic Experience is unsinkable. I may have misgivings about this. Sadly I can’t think of an appropriately large nautical metaphor with which to express them.