Puppy parties with a purpose 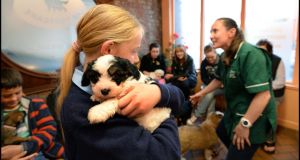 Puppies so small and perfect they look like they need batteries are wobbling around on the floor at our feet. It’s enough to give you a cutegasm. The biggest ball of fluff on the tiles is Harvey, an eight-week-old pedigree Saint Bernard that already weighs 10kg.

Harvey is being pursued by Jessie, a 12-week-old slim black mutt with a red setter mother and a collie-cross father, though “undetermined” may be more apt.

Harvey’s owners, 13-year-old Kate O’Hogan, who got him as a surprise for her birthday, and her dad Dennis, are vigilantly keeping an eye on what the boisterous Jessie might inflict on Harvey and things get a little tense.

A puppy party is like a parent and toddler playgroup: you don’t want your kid to be the one who bites somebody, and vice versa. Puppies are like toddlers but with more and sharper teeth.

Jessie only wants to play and even after Jessie and Harvey have been repeatedly separated, Harvey defies his owners’ concerns to seek Jessie out. Harvey likes the rough and tumble with Jessie, the most outgoing dog in the room. However, if Jessie were a child, other parents would be wary of his hyperactivity.

We’re in Ark Vet Care on Patrick Street, Dún Laoghaire, where more than a dozen new puppies and their attentive owners are enjoying a “puppy party”. Keeping her mop handy, veterinary nurse Carol Costello warns us that without proper training, puppies will grow into destructive dogs that mess everywhere, “fight, bite and steal things” and become impossible to live with.

Between my boots appears designer dog Henry, a tiny black-and-white cavbischon (part King Charles Cavalier, part Bichon Frise). As I nearly step on her, she is rescued by her family, teenager Emma and Emma’s mother Gillian Dent-Cullen, both first-time dog-owners.

Gillian is laughing because she has just heard from the other children at home that her husband, who is in Johannesburg, has phoned the kids at home to be told, “Mum’s at a puppy party.” The husband is now frantically texting Gillian for clarification, and she’s not answering, allowing this enticing and confusing prospect to stew a while in her husband’s brain. “It’s hilarious, they are so cute!” she says.

Six tiny pedigree border terriers, all from the same litter, are attempting to chew through the tough plastic on bags of dog food, while Jessie takes possession of the Kong (a hollow plastic doggy essential that emits food when played with), proving that she’s the most advanced dog in the room.

Her owner Meg Wood is attending her third puppy party with Jessie. “I’ve had three dogs – the last died in February – but this is my first puppy. The house was so quiet without a dog,” says Meg. As Jessie is gently removed, yet again, from the gorgeous Harvey, Meg says mischievously, “Jessie is being a bad girl, but when my grandchildren come to visit she is wonderful with them. The two-year-old just stands her ground and says, ‘Jessie, down!”

Costello never reprimands dogs, always rewarding them with coos and rubs around their ears and chins. When she pulls Jessie away from Harvey, for example, she praises Jessie for co-operating rather than shaming her. Have a variety of toys and meaty treats (shredded cooked chicken is ideal) to reward the puppy. The bigger the task asked of the dog, the better the reward.

This is where it gets really charming: Carol is demonstrating how to teach a dog to sit and lie down. Jessie steps in to show how it’s done while all the pedigree dogs watch – those who haven’t fallen asleep, that is.

Punishing a dog, putting its nose in it, tapping its nose and other means of intimidation will not work and are likely to create an aggressive grown-up dog, she says.

Trained in dog behaviour at Fetac level 5, Costello always gives owners the strong message that domination training should be banned, a view held by the Association of Pet Dog Trainers Ireland and other societies that advocate proper dog care.

Training a puppy takes many months of focus and early mornings. If you can, when you first get your puppy you should take a couple of weeks of holiday time to train it to do its business outside, an investment that will pay off.

Rise between 6am and 7am to get the dog out into the garden, then continue that at hourly intervals until bed-time. Watch the puppy constantly for signs it needs to go, and take it outside to the garden as soon as it does. The puppy will associate the cement, grass, bark or gravel ––whatever the garden area has – with emptying its sweet little self.

Whether the puppy seems to want to pee or not (though usually it does, as puppies pee quite a lot), take it out once per hour. If they have an accident indoors, always clean it with a solution of biological laundry detergent to kill the enzymes, or the dog will be attracted back to the spot again and again.

Another method is to use absorbent pads, which you then move closer and closer to the door, but the disadvantage is that the dog associates the pad with its business, so you eventually have to wean the dog off the pad.

One young couple cuddling a new puppy like a baby want to know if they need to keep getting up at night to bring the puppy out and are told not to get up at night. At bedtime let it sleep; it won’t want to mess its bed. All dogs need a comfortable quiet space where they can retreat from family life, and need to learn to be alone. Never get up at night to soothe a noisy puppy, or you will end up with a dog that disturbs your sleep forever.

Apart from training, puppies need vaccines, worming and good quality food. Get those three things right, and you’ll have a happy, well-behaved dog, Costello says. And don’t let them chew slippers – it will be your best new shoes next.

Up the road in Arnold Park, Glenageary, Sarah Nevin and her fellow dog-owners are having a doggy playgroup on the grass. These are older dogs of all shapes and sizes who are learning to socialise with one another outdoors.

Nevin (31) has a sign on the door of her high-end pet shop, Nature and Nurture, stating that there’s a crazy dog lady inside and while she’s certainly not crazy, she is passionate about dogs.

When she finished her job in banking two years ago, she toured the world visiting pet shops, from Thailand to Australia to the US, and is also trained in animal behaviour. Her shop nearly always has at least one dog owner by the counter seeking Nevin’s advice.

In Arnold Park, about a dozen dogs and their owners have congregated – there’s Patti Smith, Ralph the Pugaleer (pug mixed with cavalier) and Finnegan, who thinks he runs the pet shop. Whether they’re pedigree or bought from Done Deal, all the dogs mix together playing chasing and tumbling, although – just like toddlers in a playgroup – not all get along.

“Not everybody likes everybody and it’s the same for dogs and people, so you need to be careful,” says Nevin, who watches all the dogs’ interactions closely. This social evening is also enjoyable for the owners, among them Kate Nowak, who is Polish and has lived here for seven years and owns her own business. She got her dog Patti Smith from the Dogs Trust two months ago. “She’s delighted to be playing with other dogs,” says Kate. “It’s fantastic. I would have been very nervous but this has made me braver to let her off the lead.”

“Whoops! There’s a pooper!” someone shouts as Cocoa the Yorkie hunkers down and its owner brandishes a plastic bag.

For dogs wary of others, the Yellow Dog Project is an international effort, now in Ireland, to put yellow ribbons or bandanas on dogs that shouldn’t be approached while training or recovering, so that other dog owners know to give them a wide berth.

Some dogs need their space but if you start with puppy parties and doggy playgroups, you’re more likely to have a sociable dog.

The decline of Irish America: ‘It is more and more distant’
6

Buttered leeks, salmon and dill with orzo: a healthy dish bursting with flavour
7

50 amazing places to stay around Ireland
10