Obituary: Iraqi-British architect embodied the era of the starchitect 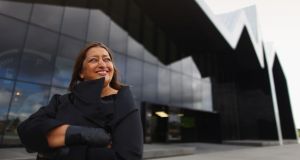 Zaha Hadid, the Iraqi-British architect whose soaring structures left a mark on skylines and imaginations around the world, and in the process reshaped architecture for the modern age, died in Miami at the age of 65.

She was not just a rock star and a designer of spectacles. She also liberated architectural geometry, giving it a whole new expressive identity. Geometry became, in her hands, a vehicle for unprecedented and eye-popping new spaces but also for emotional ambiguity. Her buildings elevated uncertainty to an art, conveyed in the odd ways one entered and moved through those buildings and in the questions her structures raised about how they were supported.

Her work, with its formal fluidity – also implying mobility, speed, freedom – spoke to a worldview widely shared by a younger generation. “I am non-European, I don’t do conventional work and I am a woman,” she once told an interviewer. “On the one hand all of these things together make it easier – but on the other hand it is very difficult.”

Strikingly, Hadid never allowed herself or her work to be pigeonholed by her background or her gender. Architecture was architecture: it had its own reasoning and trajectory. And she was one of a kind, a path breaker. In 2004 she became the first woman to win the Pritzker Prize, architecture’s Nobel; the first, on her own, to be awarded the RIBA gold medal, Britain’s top architectural award, in 2015.

She sued for defamation one critic who falsely reported that 1,000 workers had died building her stadium – before construction had even begun. She won a settlement and an apology.

After winning the competition to design a new stadium for the 2020 Olympics in Tokyo, Hadid’s firm was fired by Japanese authorities, over accusations about looming cost overruns, a decision Hadid loudly declared unjust and political.

Hadid was born in Baghdad in 1950. Her father was an industrialist, who headed a progressive party advocating for secularism and democracy in Iraq. Baghdad was a cosmopolitan hub of modern ideas, which clearly shaped her upbringing. She attended a Catholic school where students spoke French, and Muslims and Jews were welcome. After that, she studied mathematics at the American University in Beirut (she would later say her years in Lebanon were the happiest of her life).

Then, in 1972, she arrived at the Architectural Association in London, a centre for experimental design. Her teachers included Elia Zenghelis and Rem Koolhaas. They “ignited my ambition,” she would recall, and “taught me to trust even my strangest intuitions”.

Hadid’s intuitions led her, among other directions, toward the Russian avant garde, and its leaders: Vladimir Tatlin, El Lissitzky and Kazimir Malevich.

For a while she worked at Koolhaas’s Office for Metropolitan Architecture, in Rotterdam, a cutting-edge firm and crucible for gifted young architects. By the 1980s she had established her own practice in London. And she began to draw attention with an unrealised plan in 1982-1983 for the Peak Club, a private club in the hills of Kowloon, in Hong Kong.

Hadid’s concept was a jagged, gravity-defying composition of beams and floating shards cantilevered into the rock face. It encapsulated the 1980s movement called deconstructivism. During these years Hadid turned out an astonishing, super-refined variety of futuristic drawings and paintings. She used her art to test spatial ideas that she couldn’t yet make concrete without the aid of computer algorithms. She soon developed an insiders’ reputation as a leading theoretical designer of groundbreaking forms with unrealised projects such as the Cardiff Bay opera house in Wales.

Getting her designs built was something else.

In 1994, her first real commission came along, a fire station in Weil am Rhein, Germany. It inspired a design of typically outsized imagination: a winged composition, all sharp angles and protrusions. Architects were impressed. The firefighters, not so much. They moved out, and the station became an event space.

Projects followed, such as the Phaeno Science Centre in Wolfsburg, Germany; the Bridge Pavilion in Zaragoza, Spain; and an opera house in Guangzhou, China, whose rock crystal-shaped design she likened to “pebbles in a stream smoothed by erosion.” Her sources were nature, history, whatever she thought useful.

It took years before Hadid won major commissions in Britain, where she had became a citizen and established a thriving office. Her Aquatics Centre in London, built for the 2012 Olympics, was a cathedral for water sports, with an undulating roof and two 50m pools.

Survived by an older brother, Haytham Hadid, she leaves unfinished, among other projects, a luxury apartment building beside the High Line in New York City. Hadid embodied, in its profligacy and promise, the era of so-called starchitects, who roamed the planet in pursuit of their own creative genius, offering miracles, occasionally delivering.

“She was bigger than life, a force of nature,” as Amale Andraos, dean of Columbia University’s architecture school, put it. “She was a pioneer.”

She was. For women, for what cities can aspire to build and for the art of architecture.