Will these ‘period-proof pants’ make life easier for menstruating women? 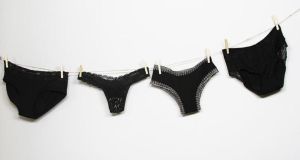 Every once in a century or so, someone comes up with an innovation that will make women happier. The Pill, of course, but before that the bra - invented in the 1920s by a woman tired of corsets who asked her maid for two handkerchiefs and some ribbon.

Now we have another lifestyle enhancing invention - leakproof “period panties” from Thinx.

These are pretty knickers in several styles that incorporate a patented absorbent material. They are washable and reusable and thus sustainable, like cloth diapers v disposables. The great advantage to them is that dressed or undressed, nobody knows you are wearing them and the absorbent part, which is so thin you wouldn’t know it was there, can’t slip loose because it’s part of your underwear.

The three entrepreneurs behind the invention - New Yorker Antonia Dunbar and identical French-Canadian twins Miki and Radha Agrawal - hope to eliminate taboos around having periods and thus empower women. Agrawal came up with the concept when she had to cut an important business meeting short because she’d leaked blood onto her white skirt.

Thinx come in lacy styles in black or neutral- thong, hippy and hiphugger. The first is for light days, the second for medium days and the third for heavier days. As the company slogan goes “only you know your flow”. They still have to be worn with ordinary pads, but because they can absorb up to two tampons of menstrual blood, they give confidence against leakage.

If these ’period pants’ help allay menstrual-related embarrassment, I’m all for them. What woman will ever forget her first period? I was a bridesmaid in yellow chiffon, when the flood started. The contraption fitted to me had elastic straps and metal hooks and a large diaper-thick piece of cotton that was difficult to walk with. And it was terribly medical. Only to be spoken of in whispers.

During your period you had to be wearing a skirt, never jeans, and in the gym locker room it was really embarrassing as everyone could see. Having your period was even an excuse to get out of gym. Then there was the white jeans moment, in college in the late 1970s, when the flow began out of nowhere and I was alerted to it by the honking horn of a passing truck driver.

Then in the 80s came sticky pads and pads with wings and tampons and then smaller more absorbent tampons and thinner pads and by 2015 you’d think someone would have figured out how to design a blood absorbency product that was comfortable and didn’t ruin your nice underwear.

There are many countries in the Third World where menstruation is even more difficult for practical reasons, such as the cost and availability of what polite marketers call ’feminine hygiene products’.

One of the founders Miki Agrawal, is one of Forbes magazine’s “millennials on a mission” and a serial social entrepreneur. The company has teamed up with AFRIpads in Uganda to fund 7 reusable cloth pads for every piece of underwear sold to get 67 milliion girls back in school.

“We see a world where no woman is held back by her body,” say the women who point out that in the third world, girls miss out not just gym, but school entirely, because of the taboo around menstruation.

They are even thinking of inventing women’s underwear with a warming section to ease the agony of cramps:

“By reimagining feminine hygiene products to provide support, comfort, confidence, and peace of mind, we aim to eliminate shame, empowering women and girls around the world.”