What might a father teach daughters about gender in this era of tub-thumping feminism?

How to Be a Man: I don’t have the tools or experience to teach my girls how to become women, but I can teach them about men 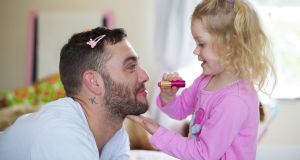 Being the father of two daughters, aged 5½ and 20 months, is the greatest thing in the world, but it has a couple of serious downsides. For instance, everything is pink and my house is infested with princesses. Giggling, warbling, preening little potentates.

Pink is fine in small doses. I once had a pink shirt, although I try not to dwell too much on the memory. But in general I avoid the colour. Not because it is “for girls”, but because I don’t like looking at it. It is just a spineless, washed-out red.

Once you have girls you realise just how insidious pinks, pretty princesses and dolly-driven notions of “girlish” behaviour become in their formative years. They are doused with it.

My eldest’s schoolbag is pink with demure-looking princesses, as is her pencil case. Her bedspreads are, too, like many of her clothes, toys and cartoons. As a pink-basher, it all seems a bit suffocating, but there is just too much of it to filter it all out, and anyway, I don’t want to be a tyrant dad.

But I resent that my daughters are engulfed in this pestilence of pinkish propriety. I’ve recently begun broaching it with my eldest: “You know, pink doesn’t absolutely have to be your favourite colour just because you’re a girl, right?”

She looked at me like I was talking Sanskrit . . . backwards.

“And you don’t have to wish you were a princess, not if you’d rather be something else. Girls can be anything they want.”

Thankfully, my girls both have independent, stubborn streaks that I will rue when they are teenagers. But for now I feel I should at least counterbalance some of the social conditioning, for the sake of my eyes as much as their individuality.

What else might a father teach his daughters about gender, particularly in this age of tub-thumping, third-wave feminism? I obviously don’t have the tools or experience to teach my girls how to become women. But I can teach them about men.

I am sometimes weary of modern feminism, even though I agree with its professed aim of equality between sexes. It’s not that I feel threatened by it, but I’m quietly irritated by the self-righteous din of some of its most vociferous proponents.

I want my daughters to become empowered and conscious of the risk of harm from male perpetrators. But for ideological reasons, feminism’s vanguard often ascribes nefarious motives to even the most trifling foibles of men and maleness.

Such a suspicious and judgmental environment protects nobody from anything, but serves to propagate notions such as rape culture, which I believe is just as much an artificial construct as the idea that my daughters should wear pink.

Culture of abuse
I don’t see the benefit in filling people full of the terrifying but debatable notion that all men participate in a culture of abuse through everyday infractions, the most minor of which can be puerile and rude, but hardly dangerous.

A healthy understanding of men will benefit my daughters much more than an unhealthy fear of them. I want them to become strong and confident women, enthusiastic participants in an exchange of ideas with everyone around them. I don’t want them to feel hopelessly overwhelmed by patriarchy.

Feminists will argue I’m self-centred, defensive or missing the point, which is that women’s problems matter more than men’s view of them. I can understand that viewpoint. I’m merely expressing a different one.

Some feminists will say I should get off the pitch, which means “shut up”. I would prefer men to engage, which means talk as well as listen. I also often find it is a minority of male feminists, a few of whom display the fervour and insecurity of religious converts, who are most resistant to a free flow of ideas on gender politics.

The world is not all victims and villains, black and white.

And it’s certainly not all pink.