Our Wedding Story: From a pizza first date to a Mexican honeymoon 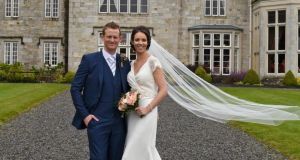 Oneesa McWeeney and Adrian Cahill had a mini-moon in The Wineport Lodge in Glasson before their Mexican honeymoon. Photographs: David Knight Photographer 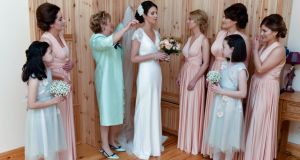 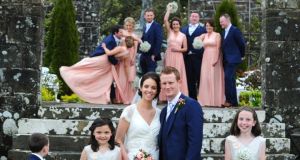 Garda Adrian Cahill (30) and Oneesa McWeeney (30), an executive assistant, are both from Celbridge, Co Kildare, and their first date was aged 19 in Pizza Stop on Dublin’s Chatham Lane.

On February 25th, 2014, Oneesa arrived home from work to Adrian who proposed with a promise ring. A few days later the couple had lunch in Dublin city followed by an appointment in Appleby’s where Oneesa chose her engagement ring. “It was just a perfect day,” she said. They were married on April 24th, 2015, in St Brigid’s Church, Drumcong, Keshcarrigan, Co Leitrim – where the bride was baptised and where her father is from. Aisling Salmon sang during the ceremony.

The couple were joined by 300 guests for a reception at Lough Rynn Castle, Co Leitrim. Music was by Manila Strings, with Roscommon-based band Gobsmacked taking over later on in the night. Carlingford-based Heavenly Cakes made the cake.

Oneesa’s dress was from McElhennys in Co Donegal, and her maid of honour was Sinead Deering with bridesmaids Elma Malone, Claire McNabola and Jillian Conefrey. The flowergirls were Niamh and Aisling McWeeney. Adrian’s best man was Emmet Rice and the groomsmen were Fran Glennon, Paul Spratt and Colin Noonan. Conor McWeeney was the page boy.

“It was just such a great week leading up to the day,” said Oneesa. “Friends and neighbours from the parish my dad is from, Keshcarrigan, were so good – from helping my parents with gardens around the house, to redecorating, to cooking breakfast for us that morning.”

The couple’s first dance was to Everywhere by Fleetwood Mac and the following day was spent in Gertie’s pub in Keshcarrigan village. They had a mini-moon in The Wineport Lodge in Glasson before taking off to spend 10 days in Mexico.